This page can be viewed at http://www.historycommons.org/entity.jsp?entity=richard_rogers_1

Richard Rogers was a participant or observer in the following events:

The FBI’s Hostage Rescue Team (HRT) leader Richard Rogers urges senior FBI and Justice Department officials to use tear gas to bring the Branch Davidian siege (see 5:00 A.M. - 9:30 A.M. February 28, 1993 and March 1, 1993) to a close. According to a memo written by Deputy Assistant Director Danny Coulson, the FBI’s top expert on tactical matters, “A lot of pressure is coming from Rogers.” Coulson writes that Rogers urged similar tactics in the 1992 Ruby Ridge debacle (see August 31, 1992): “We had similar problems in Idaho with him [Rogers] and he argued and convinced the SACs [special agents in charge of local FBI offices involved in the incident] that [Randy] Weaver would not come out. That proved to be wrong. I believe he is a significant part of the problem here.” Rogers’s advice, that only extreme and violent action could force Weaver to emerge, sparked the death of Weaver’s wife and son. In 1992, Rogers relaxed FBI rules of engagement and tried to force an all-out assault on the Weaver cabin using tanks and tear gas. Weaver eventually surrendered. Coulson believes that Davidian leader David Koresh will also surrender, if given enough time. “All of their intelligence indicates that David [Koresh] does not intend suicide and that he will come out eventually,” Coulson’s memo concludes. (Hancock 2/28/2000) The day after Coulson’s memo is circulated, the FBI begins bombarding the compound with sound and light (see March 23-24, 1993).

David Koresh, the increasingly unstable leader (see April 9, 1993) of the besieged Branch Davidian sect near Waco, Texas (see 5:00 A.M. - 9:30 A.M. February 28, 1993 and March 1, 1993), informs FBI negotiators in a letter written to his lawyer Richard DeGuerin that God has finally spoken to him; he will leave the compound once he has written a manuscript explaining the Seven Seals, a Biblical concept that is associated with the Apocalypse. According to the book Snapping: America’s Epidemic of Sudden Personality Change, Koresh’s lieutenant Steve Schneider tells negotiators that it might take “six months or six years” to complete the manuscript. Other sources say that Koresh intends to finish the manuscript within several weeks. (US Department of Justice 4/14/1993; Conway and Siegelman 1995, pp. 244; Moore 1995; Boyer 5/15/1995)
Religious Basis for Surrender? - The latest letter from Koresh is substantially different from his previous letters; while the earlier letters were primarily rambling Biblical dissertations, this letter states a deadline as to when the Davidians will leave and Koresh will surrender. Experts reading the letter note that it is far more prosaically written than the earlier letters, and states Koresh’s desire to leave the compound and “stand before man to answer any and all questions regarding my actions.” Some religious scholars, later reading the letter, will say that they believe Koresh has found a religious rationale for surrendering. James Tabor of the University of North Carolina will say, “Koresh used the religious arguments in this letter for why he had now seen that the scriptures told him to come out.” Tabor and his colleague, Philip Arnold of the Reunion Institute of Houston (see March 7, 1993), will note that Koresh now seems to believe that surrender is a viable option because he “could come out and preach his message.” (US Department of Justice 4/14/1993; House Committee on Government Reform and Oversight 8/2/1996)
Davidians 'Cheer' over Likelihood of Departure - DeGuerin, representing Koresh and the Davidians (see April 1-4, 1993), says that the Davidians are happy about the prospect of their imminent release. “[E]everyone was relieved they did not have to die,” DeGuerin will later recall. The Davidians obviously believe they are leaving; cheering can be heard on FBI surveillance audiotapes. Tabor will later testify: “You can exactly see the mental state of the people inside. It is buoyant. They are talking about coming out. They are excited about it.” Tabor will quote surviving Davidians as saying, “We were so joyful that weekend because we knew we were coming out, that finally David had got his word of how to do this legally, the lawyers, and theologically in terms of his system.” (House Committee on Government Reform and Oversight 8/2/1996)
FBI, Justice Department Refuse to Countenance Idea, Continue with Plans to Assault Compound - In Washington, Attorney General Janet Reno continues to review plans to flush the Davidians out with tear gas (see April 12, 1993), and meets with members of the Army’s elite Delta Force to fine-tune the strategy. Senior White House and Justice Department officials conclude that there is no hope of Koresh surrendering peacefully, a conclusion reinforced by FBI senior agent Byron Sage, one of the principal negotiators, who tells officials that in his opinion further negotiations would be fruitless. The FBI agent in charge of the siege, Jeffrey Jamar, gives DeGuerin and his fellow lawyer Jack Zimmerman the impression that he takes Koresh’s offer of surrender seriously, but as Jamar will later testify, he does not. Jamar will later testify: “It was serious in [DeGuerin’s and Zimmerman’s] minds. I think they were earnest and really hopeful, but in Koresh’s mind, never a chance. I’m sorry.” The Delta Force members are present at the request of FBI Director William Sessions, to convince Reno to go along with the tear-gas plan. They reassure her that tear gas presents no danger to both the adults and the children in the compound, and that it cannot catch fire. Richard Rogers, the head of the Hostage Rescue Team (HRT—see March 31, 1993), says that if the situation in Waco is not resolved soon, he will have to withdraw his men for rest and retraining. Reno asks why, if the HRT teams must be withdrawn, local SWAT teams cannot be deployed in their place; Rogers and other FBI officials say the presence of the HRT teams is “essential.” However, even with the pressure from the FBI officials, Reno rejects the plan. (Boyer 5/15/1995; PBS Frontline 10/1995) She will approve a modified version of the plan two days later (see April 17-18, 1993). She is apparently unaware that the FBI will lob pyrotechnic grenades either into or near the building (see August 25, 1999 and After).
Opinions Vary on Koresh's Intentions, Sincerity - Sage will later say that in his opinion, Koresh never intended to follow through with the proposed surrender. He will say that Koresh turns down offers to provide typists and word processors to help him complete his manuscript, though the FBI provides equipment to let Davidian Ruth Riddle begin typing transcripts for him. Sage is convinced, he will say, that the entire manuscript proposal is “just another delaying tactic.” (Dick J. Reavis 7/19/1995; PBS Frontline 10/1995) Others have a different opinion. Two religious scholars, Arnold and Tabor, have studied Koresh’s earlier broadcast (see March 2, 1993), and believe that Koresh has decided that the Apocalypse he believes is unfolding at Mt. Carmel still has a year or so before it concludes; Koresh’s decision to write the manuscript about the Seven Seals indicates to them that he has changed his mind about the timeframe of the End Days. They believe that Koresh means what he says and does intend to surrender after completing the manuscript. (Dean M. Kelley 5/1995) 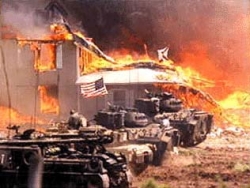 The FBI releases a videotape taken during the first minutes of the April 1993 assault on the Branch Davidian compound near Waco, Texas (see April 19, 1993), which contains audio of Richard Rogers, the assistant special agent in charge of the FBI’s Hostage Rescue Team (see March 23, 1993), giving permission for agents to fire military tear gas at a bunker several hundred yards away from the main Davidian compound. Those military gas canisters contained incendiary devices to help disperse the gas. The Justice Department recently admitted, after six years of denials, that the FBI did use incendiary devices during the attack, though both agencies continue to insist that their actions did not lead to the fires that consumed the compound and killed almost 80 Davidians (see August 25, 1999 and After). Rogers gave permission to fire the incendiary canisters at 7:48 a.m., almost two hours after the assault commenced. The videotape was taken by an FBI surveillance aircraft using infrared radar during the first hours of the assault. (Vicini 9/4/1999; Walsh 9/4/1999) The next day, the FBI will release another tape with audio describing the effects of one such gas canister on the bunker (see September 3, 1999).

Memos withheld from Congressional investigators (see August 4, 1995) by the FBI show that the FBI was riven by dissension during the Branch Davidian siege, which culminated in a fiery conflagration that killed scores of sect members (see April 19, 1993). The memos are released by the Dallas Morning News. Many senior FBI officials were pressing to use tear gas to bring the siege to a close, some as early as three weeks after its start. According to a March 23, 1993 memo (see March 23, 1993) written by then-Deputy Assistant Director Danny Coulson, the FBI’s top expert on tactics, the Hostage Rescue Team leader, Richard Rogers, was pressuring FBI officials to terminate the siege by using gas as part of an assault. Coulson disagreed with Rogers’s recommendations. Coulson is the former agent who recently revealed that the FBI had used pyrotechnic grenades during the final assault (see August 25, 1999 and After). Some House members are angry about the withheld memo, and note that they have consistently been denied documents even after subpoenas were issued. “We’ve had a subpoena out there for all relevant documents—all documents—since September 7, 1999,” says Mark Corallo, the spokesman for the House Government Reform Committee. “Is the Department of Justice withholding only embarrassing documents from us? It makes you wonder.” Other FBI documents released by the Dallas Morning News show that Attorney General Janet Reno gave her approval to use tear gas on the compound (see April 17-18, 1993). (Hancock 2/28/2000)