This page can be viewed at http://www.historycommons.org/entity.jsp?entity=richard_spertzel_1

Richard Spertzel was a participant or observer in the following events: 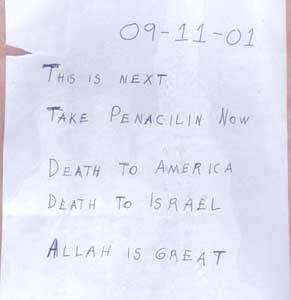 The contents of the anthrax letter to the New York Post. [Source: FBI]The New York Times suggests there could be a link between the recent anthrax attacks (see October 5-November 21, 2001) and the 9/11 hijackers. The Times reports that investigators “say they suspect that the rash of contaminated letters is related to the Sept. 11 attacks and are investigating the possibility that al-Qaeda confederates of the hijackers are behind the incidents.… Senior government officials said investigators were focusing on the ability of the hijackers or their accomplices to obtain highly refined anthrax from a foreign or domestic supplier. While they have not ruled out the possibility that another criminal could be behind the anthrax attacks, investigators are looking intensely at evidentiary threads linking the letters to the hijackers.”
Little to No Evidence behind this Theory - FBI agents are said to have recently searched the Jersey City home of three men arrested on suspicion of links to the 9/11 attacks after learning they kept some magazines and newspaper articles about biological warfare there. These men include Ayub Ali Khan and Mohammed Azmath. Both men will later be cleared of having any al-Qaeda ties (see October 20, 2001). The hijackers did show some interest in crop dusters, which could be used in a biological attack, but a senior government official says no actual evidence has appeared linking any of the hijackers to the anthrax attacks in any way.
Domestic Loner Theory - The article notes that the FBI is also pursuing a competing theory, “that a disgruntled employee of a domestic laboratory that uses anthrax carried out the attacks.” However, no evidence has emerged yet to support this.
Iraq Not Likely - The article is dismissive of theories that Iraq or another foreign government was behind the attacks. It notes that the anthrax letters used the Ames strain of anthrax, and experts say the Iraqi government never obtained that strain. For instance, former UN weapons inspector Richard Spertzel says, “The Iraqis tried to get it but didn’t succeed.” (Johnston 10/19/2001)

The Washington Post publishes an article suggesting a possible link between the anthrax attacks and the Iraqi government. But despite the title “Anthrax Type That Killed May Have Reached Iraq,” the evidence of a link presented in the article is not very strong. It is generally believed that Iraq was unable to acquire the Ames strain of anthrax. But the article says that two Iraqi officials attended a scientific conference in Britain in 1988 and were attempting to obtain various strains of anthrax, including the Ames strain. Shortly after the visit, Iraq’s trade ministry attempted to order some anthrax samples from the British government, including the Ames strain. At the time, Iraq has good relations with the US and other Western countries, but the order was nonetheless rejected over fears the Iraqis might want to use the anthrax in a bioweapons program. Former UN weapons inspector Richard Spertzel says, “We know that Iraq was very keen on obtaining that specific strain as well as others, and they were contacting many countries of the world.… But we simply don’t know [if Iraq was successful.]” However, from 1991 to 1998, UN inspectors monitored Iraq with on-site searches and never saw any evidence that Iraq was using the Ames strain. (Lynch 11/25/2001) One month later, it will be reported that all efforts to link the anthrax attacks to Iraq have been unsuccessful (see December 22, 2001).

October 28, 2002: Many Scientists and Experts Believe One Person Could Not Have Caused Anthrax Attacks; Suggest State Sponsor Such as Iraq Instead

The Washington Post reports in a front-page story, “A significant number of scientists and biological warfare experts are expressing skepticism about the FBI’s view that a single disgruntled American scientist prepared the spores and mailed the deadly anthrax letters that killed five people last year.” More than a dozen experts suggest investigators should “reexamine the possibility of state-sponsored terrorism, or try to determine whether weaponized spores may have been stolen by the attacker from an existing, but secret, biodefense program or perhaps given to the attacker by an accomplice.” These experts suggest that making the type of anthrax used could take a team of experts and millions of dollars. The article focuses on the possibility that Iraq could be to blame, and mentions that unnamed senior Bush administration officials believe Iraq was behind the attacks (see October 28, 2002). However, even though the Post claims “a consensus has emerged in recent months among experts,” only one expert, Richard Spertzel, is named who supports the Iraq theory. Spertzel was the chief biological inspector for the UN Special Commission from 1994 to 1998. He says: “In my opinion, there are maybe four or five people in the whole country who might be able to make this stuff, and I’m one of them. And even with a good lab and staff to help run it, it might take me a year to come up with a product as good.” (Gugliotta and Matsumoto 10/28/2002) Although the article doesn’t mention it, the other scientists Spertzel say could make the anthrax are renowned bioterrorism expert William Patrick and several unnamed scientists at Dugway Proving Ground, the US Army’s bioweapons laboratory in Utah, that Patrick trained in anthrax production in 1998. (Foster 9/15/2003) This renewed focus on an Iraq-anthrax link coincides with the US push to go to war with Iraq, and will fade after the Iraq war starts.

Experts disagree if recently deceased anthrax attacks suspect Bruce Ivins had the skills needed to make the anthrax used in the attacks.
Bioweapons Expert - “One bioweapons expert familiar with the FBI investigation” says Ivins did have this skills. This expert points out that Ivins worked with anthrax at USAMRIID, the US Army’s top bioweapons laboratory, and regularly made sophisticated preparations of anthrax bacteria spores for use in animal tests. “You could make it in a week,” the expert says. “And you could leave USAMRIID with nothing more than a couple of vials. Bear in mind, they weren’t exactly doing body searches of scientists back then.”
Former Weapons Inspector - But others disagree. Richard Spertzel, a former UN weapons inspector who worked with Ivins at USAMRIID, says: “USAMRIID doesn’t deal with powdered anthrax.… I don’t think there’s anyone there who would have the foggiest idea how to do it. You would need to have the opportunity, the capability and the motivation, and he didn’t possess any of those.”
Unnamed Former Colleague - An unnamed scientist who worked with Ivins says it was technically possible to make powdered anthrax at USAMRIID, but, “As well as we knew each other, and the way the labs were run, someone would discover what was going on, especially since dry spores were not something that we prepared or worked with.” (Warrick, Thompson, and Davis 8/3/2008)
Former Supervisor - Jeffrey Adamovicz, who had been Ivins’s supervisor in recent years, says that the anthrax sent to Sen. Tom Daschle (D-SD) was “so concentrated and so consistent and so clean that I would assert that [Ivins] could not have done that part.” (Gordon 8/7/2008)
USAMRIID Division Chief - Gerry Andrews, the chief of USAMRIID’s bacteriology division at USAMRIID from 1999 to 2003, says the anthrax in the Daschle letter was “a startlingly refined weapons-grade anthrax spore preparation, the likes of which had never been seen before by personnel at [USAMRIID]. It is extremely improbable that this type of preparation could ever have been produced [there], certainly not of the grade and quality found in that envelope” (see August 9, 2008).
FBI Scientist - On August 18, FBI scientist Vahid Majidi says, “It would have been easy to make these samples at USAMRIID.” He believes that one person could make the right amount of anthrax in three to seven days (see August 18, 2008). (US Department of Justice 8/18/2008)

The Wall Street Journal publishes an op-ed by Richard Spertzel entitled, “Bruce Ivins Wasn’t the Anthrax Culprit.” As a UN weapons inspector, Spertzel headed the search for biological weapons in Iraq from 1994 to 1999. Spertzel does not believe the FBI’s case against deceased anthrax attacks suspect Bruce Ivins mainly because he maintains that the anthrax used in the 2001 attacks was weaponized and Ivins did not have the skills to weaponize anthrax. Spertzel writes: “The spores could not have been produced at [USAMRIID], where Ivins worked, without many other people being aware of it. Furthermore, the equipment to make such a product does not exist at the institute.” He says the anthrax spores were “tailored to make them potentially more dangerous.” He cites comments by government officials in the months after the attacks which claimed that the spores were coated with silica and the particles in them were given a weak electric charge, making it easier for the spores to float through the air. He concludes: “From what we know so far, Bruce Ivins, although potentially a brilliant scientist, was not… [someone who] could make such a sophisticated product.… The multiple disciplines and technologies required to make the anthrax in this case do not exist at [USAMRIID]. Inhalation studies are conducted at the institute, but they are done using liquid preparations, not powdered products.” (Spertzel 8/5/2008) The FBI will present more evidence against Ivins in subsequent days (see August 6, 2008), and will assert that the anthrax spores were not weaponized with silica or anything else. But Spertzel will remain skeptical. On August 13, he will say of the case against Ivins: “Until we see the details, who knows?… There are too many loose ends.” (Fitzpatrick 8/13/2008)