This page can be viewed at http://www.historycommons.org/entity.jsp?entity=rob_bishop_1

Rob Bishop was a participant or observer in the following events: 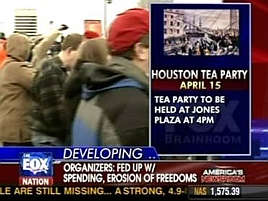 Screenshot of Fox News promoting the ‘Tea Party’ rally in Houston. [Source: Fox News / Media Matters]Republican lawmakers announce their intention to join with right-wing protesters on April 15, 2009, in what is envisioned as a nationwide protest against the Obama administration’s tax policies. The primary organizers are the think tanks Americans for Prosperity and Freedom Works, and right-wing bloggers such as Michelle Malkin. They say that under President Obama, taxes are “too high” and freedoms are being “eroded.” They have also called for Obama’s impeachment and refer to him as “Obama bin Lyin” and other derogatory nicknames.
Republicans, Neo-Nazis, Secessionists Joining in 'Tea Party Protests' - Malkin has called the movement the “Tea Party Protests,” in an attempt to connect the protests with the American Revolution’s Boston Tea Party. Senator David Vitter (R-LA) is sponsoring legislation to honor the protests. Representatives David Davis (R-TN), Jason Chaffetz (R-UT), Rob Bishop (R-UT), Todd Tiahrt (R-KS), John Fleming (R-LA), Ander Crenshaw (R-FL), Bob Latta (R-OH), John Shadegg (R-AZ), Sue Myrick (R-NC), Bill Posey (R-FL), and Louie Gohmert (R-TX) will attend local protests, as will Governor Mark Sanford (R-SC) and former Representative J.D. Hayworth (R-AZ). Officials from Senator Bob Corker’s (R-TN) and Representative Sam Graves’s (R-MO) office will attend the rallies as well, and Representatives Denny Rehberg (R-MT), Jack Kingston (R-GA), and Tom Rooney (R-FL) are urging their constituents to attend tea party protests. Former House Speaker Newt Gingrich (R-GA), who heads American Solutions for Winning the Futures (ASWF) and who will speak at the New York City rally, is encouraging his supporters to join the protests, and has provided them with what he calls a “toolkit” of talking points. ASWF is funded by oil and energy interests, and led the recent “Drill Here, Drill Now” campaign. ASWF has been an official “partner” in the Tea Party campaign since March. The Tea Party Protests are being joined by gun rights militias, secessionists, and neo-Nazi groups.
Protests Orchestrated by Lobbyist Organizations and Promoted by Fox News - The protests are being heavily promoted on Fox News, which intends to hold all-day “news reports” on April 15 featuring several of its commentators, including Glenn Beck (see March 3, 2009), Sean Hannity, Neil Cavuto, and Greta Van Susteren, live at different venues. Many of the protest organizers’ Web sites feature one or more of the Fox commentators as part of their promotion efforts (see October 13, 2009). Beck is one of several Fox commentators and hosts who claims that the protests are “grassroots” organizations “spontaneously” led by “ordinary people,” but in reality, the protests are being orchestrated by two lobbyist-run and lobbyist-organized organizations, Americans for Prosperity and Freedom Works. According to progressive news site Think Progress, “[t]he two groups are heavily staffed and well funded, and are providing all the logistical and public relations work necessary for planning coast-to-coast protests.” Freedom Works staffers are coordinating conference calls among protesters and working with conservative organizers to give them what it calls “sign ideas, sample press releases, and a map of events around the country” as well as guides featuring talking points and instructions on delivering a “clear message” to the public and the media. Freedom Works has set up numerous Web sites, some of which Think Progress claims are deliberately constructed to appear as the work of amateurs, to promote the protests. In Florida, Freedom Works took over the planning of events. Americans for Progress is writing press releases and planning events in New Jersey, Arizona, New Hampshire, Missouri, Kansas, and several other states. Think Progress calls these activities “corporate ‘astroturfing,’” which it defines as corporations’ attempts to orchestrate events appearing to be grassroots, citizen-led actions. Freedom Works is headed by former Texas Republican Representative Dick Armey, who is a lobbyist for the firm DLA Piper; Americans for Prosperity is headed by Tim Phillips, who is a former partner of right-wing activist Ralph Reed in the lobbying firm Century Strategies. Americans for Prosperity has organized numerous pro-oil company “grassroots” events. (Fang 4/8/2009; Media Matters 4/8/2009; Fang 4/9/2009)

Uranium mine near the rim of the Grand Canyon. [Source: Intercontinental Cry (.com)]The Obama administration bans hard-rock mining on more than a million acres in and around the Grand Canyon, an area rich in high-grade uranium ore reserves. The ban is for 20 years. Environmental groups and some Democratic lawmakers have worked for years to limit mining near the Grand Canyon National Park. Representative Edward Markey (D-MA), the ranking member of the House Natural Resources Committee, says, “When families travel to see the Grand Canyon, they have a right to expect that the only glow they will see will come from the sun setting over the rim of this natural wonder, and not from the radioactive contamination that comes from uranium mining.” Interior Secretary Ken Salazar, who has twice imposed temporary bans on mining claims, says: “A withdrawal is the right approach for this priceless American landscape. People from all over the country and around the world come to visit the Grand Canyon. Numerous American Indian tribes regard this magnificent icon as a sacred place, and millions of people in the Colorado River Basin depend on the river for drinking water [and] irrigation.” The basin is already considered one of the nation’s most endangered waterways, and mining operations could use vast amounts of the area’s water and taint much more. The ban reverses a Bush administration decision to open the area to new mining claims; environmentalists have long pointed to the damage wrought to the area by uranium, oil, and gas mining under the Bush administration’s policies.
Mining Poses High Risks to Environment, Tourism - One in 12 Americans gets some or all of their water from the Colorado River Basin, including the residents of Phoenix and Los Angeles, and the area generates about $3.5 billion in annual income, largely from tourism. In contrast, the mining ban will mean that 465 prospective jobs will not materialize, and the area will lose some $16.6 million in annual tax revenue from mining. Supporters of the ban say that the jobs that would come from mining in the area would not be worth the risk to the river basin and the canyon, and a mining mishap would be potentially devastating for tourism. Many of the area’s lands are considered sacred by Native American tribes, and the lands support a vast number of wildlife habitats. Taylor McKinnon of the Center for Biological Diversity says that uranium mining in the area would critically despoil the area, ruin millions of Americans’ access to fresh water, and cut, not increase, job revenues. McKinnon says: “The real economic engine in northern Arizona is not uranium mining. It’s tourism. To jeopardize our economic engine with more toxic uranium mining is unacceptable.” In 2008, former Bureau of Land Management Director Jim Baca said flatly: “Without [the Colorado], there is no Western United States. If it becomes unusable, you move the entire Western United States out of any sort of economic position for growth.” (Lustgarten and Hasemyer 12/21/2008; Daly 1/9/2012)
Republicans Criticize Ban - Some Congressional Republicans and mining industry groups call the decision indefensible, saying it will cost hundreds of jobs and deprive the nation of a much-needed energy resource. Senator John McCain (R-AZ) calls the ban a “devastating blow to job creation in northern Arizona,” and says the ban was “fueled by an emotional public relations campaign pitting the public’s love for the Grand Canyon against a modern form of low-impact mining that occurs many miles from the canyon walls.” He says that modern mining techniques will not add toxins to water drawn from the river basin. Other Republicans cite a mining industry study that claims even a severe mining accident would increase uranium levels in the Colorado River by an undetectable amount. Representative Rob Bishop (R-UT) says: “It is unconscionable that the administration has yet again caved to political pressure from radical special interest groups rather than standing up for the American people. Banning access to the most uranium-rich land in the United States will be overwhelmingly detrimental to both jobs in Utah and Arizona and our nation’s domestic energy security.” Senator John Barrasso (R-WY) calls the ban part of the Obama administration’s “war on western jobs.” Senator Mike Lee (R-UT), a tea party supporter, says: “This administration has proven incapable of using even the slightest bit of common sense when it comes to lands policy. The American people are desperate for jobs, and our domestic energy industry provides some of the best paying jobs in the western states. However, the president and Interior Secretary Salazar are intent on appeasing their friends in the extreme left wing of the environmentalist movement during an election year by locking up as much land as possible, regardless of the negative effects on our economy. For energy production that has long been safe and responsible, the announcement represents a needless overreaction to a fictitious problem.” (Senator John McCain 1/9/2012; Senator John McCain 1/9/2012) In 2008, the Environmental Protection Agency noted that mining had contaminated 40 percent of the streams and rivers in the western United States, and mining was considered the single most polluting industry in the nation. (Lustgarten and Hasemyer 12/21/2008) Many of the claims now blocked from development belong to foreign interests, including Rosatom, Russia’s state atomic energy corporation, and South Korea’s state-owned utility. (PR Newswire 6/7/2011)