This page can be viewed at http://www.historycommons.org/entity.jsp?entity=robert_t._bennett

Robert T. Bennett was a participant or observer in the following events:

Lewis “Scooter” Libby, the chief of staff for Vice President Dick Cheney, writes jailed reporter Judith Miller (see July 6, 2005) a chatty two-page letter that asserts he had wanted her to testify about their conversations all along. Miller is jailed pending her reversal of a decision not to reveal Libby as a confidential source; Libby had told Miller that former ambassador Joseph Wilson’s wife Valerie Plame Wilson was a CIA agent (see June 23, 2003, 8:30 a.m. July 8, 2003, and Late Afternoon, July 12, 2003). Libby’s letter comes after rounds of intensive negotiations between his lawyers, Miller’s lawyer Robert Bennett, and special counsel Patrick Fitzgerald. Libby says that he is glad to grant Miller a waiver of confidentiality which will allow her to testify about their conversations (see September 12, 2005), and says that a year earlier his lawyer had assured her lawyer that he had then waived confidentiality (see January 2-5, 2004). He reassures her that his decision to waive confidentiality is completely voluntary, and says he will actually be “better off” if she testifies. In conclusion, Libby writes: “You went into jail in the summer. It is fall now. You will have stories to cover—Iraqi elections and suicide bombers, biological threats and the Iranian nuclear program. Out West, where you vacation, the aspens will be turning. They turn in clusters, because their roots connect them. Come back to work—and life.” (Libby 9/15/2005

; Johnston and Jehl 9/29/2005) Miller will deny any hidden meaning in Libby’s last few lines, and deny to Fitzgerald that Libby attempted to “shape” her testimony in any way through the letter. (Miller 10/16/2005) Bennett will say he does not believe that Libby was trying to influence Miller’s testimony, but knew as soon as he read his letter that it would “be trouble” for her. “I know that the letter bothered [Judy] and it bothered me,” Bennett says. “She might be soon testifying, and a prosecutor might construe that as an attempt to influence her testimony. It was more probably just sort of a dumb thing to put in a letter.” Bennett will add: “I think it is important that Judy was protecting a source in terms of source confidentiality and the journalistic privilege. She was not protecting a source to prevent someone from going to jail. The letter just didn’t help matters.” (Waas 10/18/2005)

New York Times reporter Judith Miller is released from jail after agreeing to comply with a subpoena from the grand jury investigating the Valerie Plame Wilson identity leak (see July 6, 2005). According to Miller, the person who told her of Plame Wilson’s covert identity, former vice-presidential chief of staff Lewis “Scooter” Libby, “voluntarily and personally released me from my promise of confidentiality” (see September 15, 2005 and October 28, 2005). (Washington Post 7/3/2007) Libby’s lawyer Joseph Tate says that his client released Miller from her confidentiality agreement over a year ago, and that he was surprised to learn that Miller and her lawyer, Robert Bennett, did not know that she was free to testify. “We told her lawyers it [Libby’s original waiver] was not coerced,” Tate says. “We are surprised to learn we had anything to do with her incarceration” (see September 12, 2005). (Schmidt and VandeHei 9/30/2009) Times publisher Arthur Sulzberger says: “Judy has been unwavering in her commitment to protect the confidentiality of her source. We are very pleased that she has finally received a direct and uncoerced waiver, both by phone and in writing, releasing her from any claim of confidentiality and enabling her to testify.” Miller adds: “I went to jail to preserve the time-honored principle that a journalist must respect a promise not to reveal the identity of a confidential source. I chose to take the consequences—85 days in prison—rather than violate that promise. The principle was more important to uphold than my personal freedom.” (Johnston and Jehl 9/29/2005) In preparation for her upcoming testimony (see September 30, 2005), Sulzberger and Times executive editor Bill Keller take Miller from jail to have a massage, a manicure, a martini, and a steak dinner before she goes home to sleep in her own bed. (van Natta, Liptak, and Levy 10/16/2005)

New York Times reporter Judith Miller turns over additional notes to the prosecutors in the Valerie Plame Wilson identity leak case. The notes indicate that she met with Lewis “Scooter” Libby on June 23, 2003 (see June 23, 2003) and discussed Plame Wilson’s husband, Joseph Wilson. Until these notes are revealed, Miller had testified that she had not met with Libby until almost two weeks later (see 8:30 a.m. July 8, 2003). (Johnston 10/8/2005) Miller will later say that she discovered the notes in the Times newsroom after her first testimony (see October 12, 2005). (Johnston 10/12/2005) It was during the June 23 meeting that Libby told Miller of Plame Wilson’s position in the CIA’s Weapons Intelligence, Nonproliferation, and Arms Control (WINPAC) office. Miller’s memory is also jogged when special counsel Patrick Fitzgerald shows her Secret Service logs showing that she met with Libby on June 23 in the White House Executive Office Building. Only after seeing the logs does Miller search her notes and find the information about her first meeting with Libby. Miller’s lawyer, Robert Bennett, says: “We went back on the second occasion to provide those additional notes that were found, and correct the grand jury testimony reflecting on the June 23 meeting.” He says Miller’s testimony is now “correct, complete, and accurate.” Washington defense attorney Stan Brand says that even if Fitzgerald believes Miller deliberately feigned a memory lapse about that first meeting with Libby, he is unlikely to “make an issue out of this because he got what he wanted from her,” and might still be dependant upon her as a witness during a potential trial. (Waas 10/20/2005)

New York Times reporter Judith Miller testifies for a second time to the grand jury investigating the Plame Wilson identity leak. In light of this and her earlier testimony (see September 30, 2005), federal judge Thomas Hogan lifts the contempt order he had previously issued (see October 7, 2004). Miller testifies about her notes on her discussions with Lewis “Scooter” Libby, the chief of staff for Vice President Dick Cheney (October 7, 2005). She testifies that she most likely met with Libby on June 23, 2003 (see June 23, 2003) only after prosecutors show her Secret Service logs that indicate she met with him in the Executive Office Building. She had failed to testify about that meeting in her previous testimony, and, when pressed by prosecutors, insisted that she could not remember that specific meeting. Miller’s lawyer, Robert Bennett, tells a reporter that today’s testimony “corrected” her earlier statements to the grand jury regarding the June 23 meeting. He adds, “We went back on the second occasion to provide those additional notes that were found, and correct the grand jury testimony reflecting on the June 23 meeting,” and says Miller’s testimony is now “correct, complete, and accurate.” Miller testifies today, as she did on September 30, that Libby disclosed Valerie Plame Wilson’s CIA status to her during discussions they had in June and July 2003, contradicting Libby’s own statements (see March 5, 2004 and March 24, 2004). Times editor Bill Keller says that the Times will “write the most thorough story we can of her entanglement with the White House leak investigation.” (Johnston 10/12/2005; Waas 10/20/2005)

Several news organizations are subpoenaed by the Lewis Libby defense team (see February 27, 2006). The New York Times, NBC News, and Time magazine all say they have been subpoenaed for documents and records pertaining to Libby’s involvement in the Plame Wilson CIA identity leak. The Washington Post says it expects a subpoena as well. Libby’s lawyers want to use reporters to prove that Libby did not intentionally lie to the FBI (see October 14, 2003 and November 26, 2003) and to a grand jury (see March 5, 2004 and March 24, 2004) about disclosing Valerie Plame Wilson’s identity to the press. Instead, they intend to argue that Libby failed to remember important details about his conversations with reporters regarding Plame Wilson’s identity. The New York Times acknowledges that it has been asked to provide notes, e-mail messages, draft news articles, and all other documents that refer to Plame Wilson before July 14, 2003, when her identity was made public (see July 14, 2003), and information regarding its columnist Nicholas Kristof, who wrote an article featuring Plame Wilson’s husband, Joseph Wilson (see May 6, 2003). Times spokeswoman Catherine Mathis says the newspaper has not yet decided whether to comply with the subpoena. She says former Times reporter Judith Miller has received a separate subpoena (see June 23, 2003, 8:30 a.m. July 8, 2003, and Late Afternoon, July 12, 2003). NBC’s Tim Russert (see July 10 or 11, 2003) and Time’s Matt Cooper (see 2:24 p.m. July 12, 2003) have also been subpoenaed. The Post anticipates receiving a subpoena for its managing editor Bob Woodward (see November 14, 2005 and November 16-17, 2005). (US District Court for the District of Columbia 3/14/2006

May 16, 2006 and After: Judge Reviews Journalists’ Notes and Records in Libby Proceedings

At a pretrial hearing on a motion to quash the Libby defense team’s subpoenas of journalists and media organizations (see May 8, 2006), lawyers for the New York Times, Time magazine, and NBC News agree to turn over notes, memos, and documents pertaining to their journalists’ involvement in the Valerie Plame Wilson identity leak. The Washington Post and CNN have already turned over materials requested by the defense. During the hearing, Lewis Libby’s lawyers indicate that their trial strategy will be to attack the credibility of those journalists, and claim that it was the journalists, not Libby, who lied to special counsel Patrick Fitzgerald’s investigators and the FBI. “I do respect the important role that the press plays in our society but want to give Mr. Libby the information he needs for a fair trial,” Judge Reggie Walton says during the hearing. Robert Bennett, the lawyer representing former Times reporter Judith Miller, says during the hearing that the defense’s efforts amount to nothing more than “a massive fishing expedition.” He adds, “They just want to romp through her records,” and argues that Libby’s lawyers already have all the relevant information, since Miller has already provided some information from her notebooks. “The only thing that has not been produced are things that they are not entitled to” under federal rules of evidence, such as “records of people unrelated to the case and other sources about other subjects. They have everything relevant to this case,” Bennett says. For their side, Libby’s lawyers argue that Libby’s right to a fair trial outweighs any considerations that might be given to journalists’ right to protect their sources. One of Libby’s lawyers, William Jeffress, says his job isn’t to prove anything from either the reporters’ statements or his client’s, but merely to raise “reasonable doubt” in the minds of jurors. In the days after the hearing, Walton looks over notes, drafts, and records from those journalists turned over to him by the Times, Time magazine, and NBC News, in order to find any information related to Libby’s perjury and obstruction case. Walton orders Time to turn over drafts of reporter Matthew Cooper’s first-person account of his grand jury testimony (see May 26, 2006). (Locy 5/13/2006; Reporters Committee for Freedom of the Press 5/17/2006; Smith 5/17/2006; Reporters Committee for Freedom of the Press 11/19/2009) 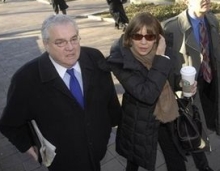