This page can be viewed at http://www.historycommons.org/entity.jsp?entity=ron_klain_1

Ron Klain was a participant or observer in the following events: 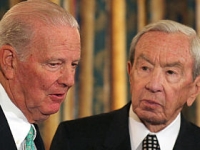 James Baker and Warren Christopher. [Source: Slate / Metrolic]The Gore campaign sends a quick-response team led by Al Gore’s former chief of staff, lawyer Ron Klain, to Florida to deal with the uncertainty of the Florida presidential race (see Early Morning, November 8, 2000). Almost immediately, Klain and his group are inundated with rumors of voting irregularities—understaffed polling places in Democratic strongholds, Democratic voters sent on “wild goose chases” to find their proper polling places, African-Americans illegally prevented from voting (see November 7, 2000), police roadblocks set up to keep voters from reaching their polls (see 11:30 a.m. November 7, 2000). Klain and his group are unable to ascertain the truth or fiction behind some of the rumors, though they learn about one that is verifiable—the problems surrounding Palm Beach County’s “butterfly ballot” that seem to have cost Gore some 2,600 votes (see November 9, 2000). Klain and the Gore campaign’s Florida head, Nick Baldick, learn that 10,000 votes for both candidates in Palm Beach have been set aside, uncounted, because of their classification as “undervotes”—votes that record no choice for president. Some 4 percent of Palm Beach voters cast their votes for senator but not for president, according to the machine scoring, a conclusion Klain and Baldick find hard to believe. They soon learn that many more “undervotes” were set aside in Miami-Dade County, like Palm Beach a Democratic stronghold. Broward County, which includes the heavily Democratic Fort Lauderdale region, is the source of a number of rumors concerning missing ballot boxes and unbelievable precinct totals. And Volusia County, another expected mine of Gore voters, initially reported a total of negative 16,000 votes for Gore. The automatic recount triggered by Florida law would not address any of these issues; manual recounts and human examination of ballots would be required to sort through the inconsistencies. Klain asks a number of Florida lawyers for legal advice and finds little help: the lawyers he contacts tell him that they are reluctant to give too much aid to the Gore campaign. “All the establishment firms knew they couldn’t cross Governor [Jeb] Bush [brother of presidential candidate George W. Bush] and do business in Florida,” Klain will later recall. Klain instead pulls together an ad hoc team to be led by former Secretary of State Warren Christopher, now a lawyer in Los Angeles. Gore chooses Christopher because he believes Christopher will lend the team an image of decorous, law-abiding respectability. But, according to a 2004 Vanity Fair report, “Christopher set a different tone, one that would characterize the Democrats’ efforts over the next 35 days: hesitancy and trepidation.” One of Christopher’s first statements on the situation is given to Gore’s running mate Joseph Lieberman, with Christopher saying: “I think we should be aggressive in asserting our position. But we’ve got to temper what we do with the realization that the nation is focused on us and is expecting to act responsibly.” The Bush campaign’s approach is very different from that taken by the sometimes-timorous Christopher. Their quick-response campaign team is headed by Texas lawyer James Baker, a close Bush family friend and another former secretary of state. As Vanity Fair will write, the Bush team “dug in like a pit bull,” issuing frequent press statements that hew to the same line: Bush won the vote on the morning of November 8 (see 2:15 a.m. November 8, 2000 and After 3:30 a.m. November 8, 2000) and therefore is the legitimate president. Any attempts to alter that “fact” amount to “mischief.” Privately, Baker worries that the narrative is untenable, telling his team: “We’re getting killed on ‘count all the votes.’ Who the hell could be against that?” The Gore campaign will ask for manual recounts in four counties, Palm Beach, Broward, Miami-Dade, and Volusia (see November 9, 2000), and the choice of selective recounts, as opposed to asking for statewide recounts, gives Baker the opening he is looking for. (National Journal 11/9/2000; Tapper 3/2001; Margolick, Peretz, and Shnayerson 10/2004)

The Bush presidential campaign files a petition in the US Supreme Court, asking the Court to review the Florida Supreme Court’s ruling that Florida can continue manual recounts, and that those new recount tallies be included in the final election results (see November 20-21, 2000). Bush lawyers argue that the Supreme Court effectively rewrote Florida election law in mandating the recount tallies be counted, by essentially changing the law after the election had occurred; they also argue that Florida judges have no jurisdiction or legal authoritiy to order Florida Secretary of State Katherine Harris (see After 3:30 a.m. November 8, 2000 and After) to consider manually recounted votes. Both arguments are considered somewhat abstruse and technical. The Bush campaign also claims, with little legal backing, that to recount the votes violates constitutional guarantees of due process and equal protection. Gore lawyers say that the matter is up to the state courts, and is not a federal matter warranting the involvement of the US Supreme Court. The Court agrees to hear the case, and sets the hearing date for December 1, 2000. (Supreme Court of the United States 11/22/2000

; Guardian 11/25/2000; Whitman et al. 12/13/2000; Pittsburgh Post-Gazette 12/17/2000; Margolick, Peretz, and Shnayerson 10/2004; Leip 2008) “We believe we stand on both strong political and legal ground for fighting beyond Sunday,” says Gore campaign adviser Ron Klain. After the Court agrees to hear the case, Harris, the co-chair of Florida’s Bush campaign team, says she is ready to certify the election for George W. Bush tomorrow night regardless of the outcome of the Supreme Court hearing. “The Department of State is prepared for the earliest contingency, which would be certification Sunday evening,” her chief of staff Ben McKay says. “This will be done publicly regardless of the outcome, which is, of course, unknown at this time.” (Guardian 11/25/2000) Many Court observers, and some of the justices themselves, are surprised that the case is being heard. The Bush petition for certiorari, or for the Court to take the case, comes to Justice Anthony Kennedy, whose task it is to consider emergency motions from Florida, Georgia, and Alabama. Kennedy pushes his colleagues to take the case, arguing that the Court is the true and ultimate arbiter of such matters, though he concedes that the Bush petition is legally questionable. The Court’s conservative bloc—Antonin Scalia, Clarence Thomas, Sandra Day O’Connor (see After 7:50 p.m. November 7, 2000), and Chief Justice William Rehnquist—agree to hear the case. (Court rules mandate that the consent of four justices, not a majority, is enough to hear a case.) The case is to be expedited in a way far different from the usual sedately paced Court proceedings. The sudden urgency has Court clerks scrambling to change their Thanksgiving plans and contacting the justices they work for. The clerks for the four liberal justices, David Souter, John Paul Stevens, Ruth Bader Ginsburg, and Stephen Breyer, are dismayed by the entire situation. “We changed our minds every five minutes about whether the fix was in,” one clerk later recalls. The liberal clerks find it almost impossible to believe that any Court justice would consider interceding in what is by constitutional definition an executive and legislative matter. Justice Stevens is not convinced of his conservative colleagues’ restraint, and begins drafting a dissent from what he fears will be a majority opinion granting Bush the election. The early draft focuses on the reasons why the Court should have never accepted the case. (Margolick, Peretz, and Shnayerson 10/2004)