This page can be viewed at http://www.historycommons.org/entity.jsp?entity=ryan_junkin_1

Ryan Junkin was a participant or observer in the following events: 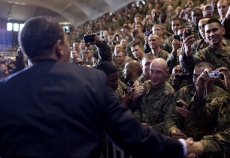 President Obama greets Marines at Camp Lejeune. [Source: White House]President Obama says that the target date for a substantial withdrawal of US troops from Iraq is August 31, 2010. “Let me say this as plainly as I can,” he tells the gathered Marines: “by August 31, 2010, our combat mission in Iraq will end.” Around 100,000 troops will be withdrawn by that date. However, major withdrawals will not begin until after December 2009, to ensure that national elections go smoothly. Obama promised that US troops would be out of Iraq 16 months after he took office in January; the new deadline extends the withdrawal by some three months. Obama tells the Marines: “I want to be very clear. We sent our troops to Iraq to do away with Saddam Hussein’s regime—and you got the job done. We kept our troops in Iraq to help establish a sovereign government—and you got the job done. And we will leave the Iraqi people with a hard-earned opportunity to live a better life—that is your achievement; that is the prospect that you have made possible.” Some 35,000 to 50,000 troops will remain in Iraq under a new mission of training, civilian protection, and counterterrorism operations. According to the latest Status of Forces (SOF) agreement between Iraq and the US, all US troops must withdraw from Iraq by December 31, 2011. White House officials say that Obama has no interest in keeping troops in Iraq after that date. The August 2010 date was decided after input from all the key principals, including Defense Secretary Robert Gates and Admiral Michael Mullen, the chairman of the Joint Chiefs of Staff. The date was chosen to best manage security risks without jeopardizing the gains of recent months. Obama has refused to set specific withdrawal schedules, preferring to give his commanders in Iraq some flexibility. One White House official says, “They’ll either speed it up or slow it down, depending on what they need.” (Associated Press 2/27/2009; White House 2/27/2009)
Positive Response - Many Iraqi citizens and lawmakers hail the decision to pull out (see February 27, 2009). And so do many of the Marines at Camp Lejeune. Petty Officer Ryan Junkin says he has an “all around pretty good feeling. It’s good that he gave some direction.” Sergeant Aldwin Del Rosario says, “My biggest take away is that he had dates, and he plans to meet those goals and those dates.” And Lance Corporal Codell Campbell says: “Iraq got all our full attention for the past years. A lot of fellow Marines have died trying to make the country better.… Afghanistan is where the real fight is.” (Khanna 2/17/2009)
Republicans Credit Bush Strategy - Senator John McCain (R-AZ), Obama’s challenger in the 2008 presidential race, says he is “cautiously optimistic” that the withdrawal will work. Both McCain and former Bush national security spokesman Gordon Johndroe credit the 2007 “surge” (see January 2007 and January 10, 2007) for making the withdrawal possible. (Baker 2/27/2009)