This page can be viewed at http://www.historycommons.org/entity.jsp?entity=saud_al-rashid

Saud al-Rashid was a participant or observer in the following events:

Dallah Avco logo. [Source: Dallah Avco]A Saudi named Omar al-Bayoumi arrives in San Diego, California. He will later become well known for his suspicious connections to both some 9/11 hijackers and the Saudi government, although the 9/11 Commission will say that it received no evidence that he was involved in terrorism or the 9/11 attacks. (9/11 Commission 6/16/2004)
Saudi Government Spy - Acquaintances in San Diego long suspect al-Bayoumi is a Saudi government spy reporting on the activities of Saudi-born college students. (Thornton 9/14/2002; Isikoff 11/22/2002; Reno 9/2003) Says one witness, “He was always watching [young Saudi college students], always checking up on them, literally following them around and then apparently reporting their activities back to Saudi Arabia.” (Isikoff and Thomas 11/24/2002) Chairman of the 9/11 Congressional Inquiry Senator Bob Graham (D-FL) and his investigators will, in author Philip Shenon’s words, “find it obvious that the amiable al-Bayoumi was a low-ranking Saudi intelligence agent,” and “someone who had been put on the ground in San Diego by his government to keep an eye on the activities of the relatively large Saudi community in Southern California.” (Shenon 2008, pp. 52)
'Ghost Employee' - Just prior to moving to the US, al-Bayoumi worked for the Saudi Ministry of Defense and Aviation, headed by Prince Sultan. His salary in this job was approved by Hamid al-Rashid, a Saudi government official whose son, Saud al-Rashid, is strongly suspected of al-Qaeda ties (see May 16, 2002). (US Congress 7/24/2003

) Once in San Diego, al-Bayoumi tells people that he is a student or a pilot, and even claims to be receiving monthly payments from “family in India” (despite being Saudi). However, he is none of those things. (Bassey 10/21/2001; Simpson 8/11/2003) In fact, as he tells some people, he receives a monthly stipend from Dallah Avco, a Saudi aviation company that has extensive ties to the same Saudi Ministry of Defense and Aviation. (McDermott 9/1/2002; Isikoff and Thomas 11/24/2002) From early 1995 until 2002, al-Bayoumi is paid about $3,000 a month for a project in Saudi Arabia even though he is living in the US. According to the New York Times, Congressional officials believe he is a “ghost employee” doing no actual work. The classified section of the 9/11 Congressional Inquiry report will note that his payments increase significantly just after he comes into contact with two hijackers in early 2000. (Risen and Johnston 8/2/2003) The FBI investigates possible ties between Dallah Avco and al-Qaeda. (Newsweek 10/29/2001) The firm’s owner, Saudi billionaire Saleh Abdullah Kamel, will deny the accusation. (Isikoff and Klaidman 7/28/2003)

May 16, 2002: Pakistan Raid Shows Son of Saudi Official Is Associated with 9/11 Hijackers 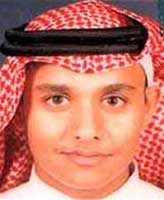 Saud al-Rashid. [Source: FBI]A CD-ROM containing a picture of a young Saudi man named Saud al-Rashid is seized in an al-Qaeda safe house in Karachi, Pakistan. The CD also contains the pictures of three 9/11 hijackers, Nawaf Alhazmi, Khalid Almihdhar, and Abdulaziz Alomari, placed in the same folder with the picture of al-Rashid. The pictures are all passport photos or pages of entry and exit stamps from the same passports. All the computer files of the pictures were saved in May 2001. A senior US official says that investigators “were able to take this piece of information and it showed clear signals or lines that [al-Rashid] was connected to 9/11.” Media reports in 2002 say that the raid takes place on August 15, but an FBI report made public years later will show the raid took place on May 16 but the importance of the CD-ROM’s contents was not discovered until August 15. (Associated Press 8/21/2002; 9/11 Commission 7/24/2004, pp. 526; Federal Bureau of Investigation 2010)
Al-Rashid Escapes Dragnet - On August 21, six days after the files on the CD-ROM are discovered, the US will issue a worldwide dragnet to find al-Rashid. (Associated Press 8/21/2002) But they are unable to catch him because a few days later, he flees from Egypt to Saudi Arabia and turns himself in to the Saudi authorities. The Saudis apparently will not try him for any crime or allow the FBI to interview him. (CNN 8/26/2002; CNN 8/31/2002)
Al-Rashid's Background - Al-Rashid was in Afghanistan in 2000 and 2001, where he met 9/11 hijacker Ahmed Alhaznawi “once or twice” in a guest house. (Johnston and Jehl 7/29/2003; 9/11 Commission 7/24/2004, pp. 526) Although detainees identify him as a candidate 9/11 hijacker, he claims not to have met Osama bin Laden or Khalid Shaikh Mohammed (KSM), or even to have heard of al-Qaeda. Under interrogation, KSM will say al-Rashid was headstrong and immature and dropped out of the plot after returning to Saudi Arabia for a visa, either due to second thoughts or the influence of his family. However, doubts will be raised about the reliability of KSM’s statements under interrogation (see August 6, 2007). (9/11 Commission 7/24/2004, pp. 526) Intriguingly, al-Rashid’s father is Hamid al-Rashid, a Saudi government official who paid a salary to Omar al-Bayoumi, an associate of both Almihdhar and Alhazmi who is later suspected of being a Saudi agent. (Johnston and Jehl 7/29/2003)
Passport Clue - Also intriguingly, the pictures from Saeed Alghamdi’s and Khalid Almihdhar’s passports show the passports were issued at “Holy Capital.” This may be an indicator placed by the Saudi government to show that the passport holders are radicals. (Federal Bureau of Investigation 2010)
Other Evidence? - Florida FBI agent Tom Yowell will later mention to the 9/11 Commission that he remembers some other 9/11-related evidence captured in a May 2002 Karachi raid, including mention of the address of a Virginia post office box (see February 19-20, 2001 and April 3-4, 2001 and around) and videos of the 9/11 hijackers. But which hijackers were videotaped, and where and when, is not mentioned. (9/11 Commission 12/4/2003