This page can be viewed at http://www.historycommons.org/entity.jsp?entity=scott_bowman_1

Scott Bowman was a participant or observer in the following events: 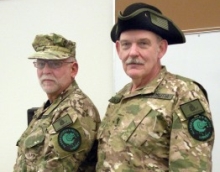 A 2009 photo of Ray Southwell and Norm Olsen. Both are wearing Alaska militia emblems. [Source: Redoubt Reporter]Former Michigan Militia leader Norm Olson (see March 25 - April 1, 1996) appears at the Freemen compound outside Jordan, Montana, currently surrounded by federal authorities (see March 25, 1996). Olson is wearing military fatigues and accompanied by two others, colleague Ray Southwell and attorney Scott Bowman. In recent days, Olson has issued a number of inflammatory statements, saying Jordan will be the site of a “second American revolution” led by Olson as “battlefield commander,” and promising “the loosing of the dogs of war.” He informs the FBI that he intends to breach its perimeter and go inside the compound, and issues a number of vague threats. “We will discuss either the terms of the FBI’s surrender,” he will later report that he tells the FBI, “or… the order of battle.” He also distributes fliers to agents which read, “FBI-ATF, are you ready to die because of the corruption within?” referring to the Bureau of Alcohol, Tobacco and Firearms. Agents refuse to talk to Olson, and stop him several miles from the compound. The next day, Olson again attempts to enter the compound and is again foiled. He then begins shouting at the officers and the reporters who have followed him. It does not take long for Olson to become a figure of fun among the reporters and citizens of the area. He will spend a lot of time in a Jordan restaurant, and an agent dubs him and Southwell “Yogi Bear and Boo-Boo.” Olson tells one amused FBI agent, “You come up to Northern Michigan, mister, and I’ll see you in my crosshairs.” (Mark Pitcavage 5/6/1996)