This page can be viewed at http://www.historycommons.org/entity.jsp?entity=scott_pierce_1

Scott Pierce was a participant or observer in the following events: 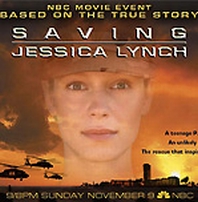 Image from the ‘Saving Jessica Lynch’ poster. [Source: Satellite Imaging Corporation]NBC’s television movie, Saving Jessica Lynch (see August 5-8, 2003), airs, attracting mediocre ratings. The film is based on the dubious account by Iraqi lawyer Mohammed Odeh al-Rehaief as published in his book Because Every Life is Precious, and actually makes al-Rehaief, not Lynch, the central figure. Lynch and her family refused to take part in the movie’s production; Lynch even refused to meet with al-Rehaief when he journeyed to her hometown in West Virginia. Days before its airing, Entertainment Weekly critic Ken Tucker, after previewing it, lambasted it as “odious,” slammed its “assiduously bland storytelling,” and said that it “represents everything that’s wrong with this genre,” a subdivision of TV docudramas that he calls the “so-called women-in-jeopardy telefilm.” The New York Times’ Alessandra Stanley calls it a “shameless attempt [by NBC] to capitalize on [a] real-life horror stor[y].” A later Times review will note, “An inordinate amount of poetic license is taken with the events surrounding Jessica’s rescue, with a plethora of ridiculous coincidences and serial-like thrills and chills thrown in to pep up the story.” (Stanley 11/7/2003; Dorsey 11/11/2003; Erickson 2008) (NBC airs a disclaimer at the beginning of the movie: “This motion picture is based on a true story. However, some names have been changed and some characters, scenes and events in whole or part have been created for dramatic purpose.”) (Boehlert 11/13/2003) In a review for the Deseret News, Scott Pierce writes, “If I thought NBC executives were capable of feeling shame, I’d suggest that they should be ashamed of themselves for foisting Saving Jessica Lynch off on viewers.” He calls the movie “a simple case of a network investing itself and its money in a project designed to grab ratings without pausing to find out what the real story was. And then not really worrying too much about getting its facts straight.… Never mind that the original story Americans were told about the rescue turned out to be largely bogus. Never mind that independent news organizations have called into question al-Rehaief’s version of events. This was ‘created for dramatic purposes.‘… [W]hat makes the telefilm nothing short of reprehensible is that, disclaimer or not, it presents fiction as fact and exploits the facts for ratings. I can’t help but think of how the families of the soldiers who died must feel about this.” (Pierce 11/8/2003)