This page can be viewed at http://www.historycommons.org/entity.jsp?entity=sheikh_bandar_1

Sheikh Bandar was a participant or observer in the following events: 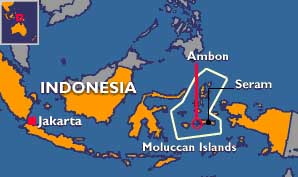 A map of Indonesia, with the Maluku islands highlighted. [Source: BBC]Omar al-Faruq, a Kuwaiti, is considered one of al-Qaeda’s top operatives in Southeast Asia due to links he developed while living in the Philippines in the early 1990s (see 1994). His handler is a Saudi named Syeh Hussein, a.k.a. Rashid. Hussein is said to have access to Osama bin Laden. He also has access to money, and is posing as a representative of the Al Haramain Islamic Foundation, a Saudi government charity. Sheikh Bandar, alias Abu Abdallah, is the head of the Al Haramain branch in Saudi Arabia (but not the head of Al Haramain’s headquarters, also in Saudi Arabia). He has an Indonesian wife and frequently travels to Indonesia, and gives large amounts of cash to al-Faruq or Hussein during his trips to bankroll their militant activities. By the second half of 2000, there is a religious war raging in the Maluku islands (also known as the Spice Islands), as thousands of Muslim militants from the island of Java had traveled there and have joined local Muslims in fighting Christians (see January 1999-July 2001). Most militants belong to the paramilitary group Laskar Jihad. Additionally, the al-Qaeda affiliate Jemaah Islamiyah has already set up its own safe house and weapons storeroom in Ambon, the capital city of the Maluku province, and coordinates the arrival of its own smaller group of volunteers from Java, who are known as Laskar Mujahidin. Hussein and al-Faruq concentrate their efforts on assisting these groups. They set up the “Special Program,” which is free paramilitary and religious training for local Muslim fighters in the Malukus. They build a training camp, including a wooden schoolhouse, near Ambon. From late 2000 until mid-2001, a rotating group of about 20 foreigners, mostly Arabs, help train locals to fight Christians. Hussein and al-Faruq also help provision militants coming to the Malukus from Java, Sulawesi, and Malaysia. They open safe houses in Ambon and south Sulawesi, fund training camps for Jemaah Islamiyah on the nearby islands of Seram and Buru, buy weapons, and buy a gunrunning boat. This effort is sucessful for a time, but it is increasingly plagued by infighting, especially conflicts between recruits from Java and Sulawesi. In mid-2001, the Sulawesi recruits withdraw from the Malukus. Al-Faruq and Hussein reduce their efforts in the Malukus after that, and focus more of their efforts fomenting religious violence on the island of Sulawesi (see December 2001). (Conboy 2003, pp. 236-240)