This page can be viewed at http://www.historycommons.org/entity.jsp?entity=sheryl_stack_1

Sheryl Stack was a participant or observer in the following events: 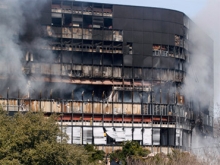 The Echelon Building in Austin, Texas, in the aftermath of Andrew Joseph Stack’s suicide crash. [Source: Jack Plunkett / Associated Press]Andrew Joseph Stack, a software engineer and pilot in Austin, Texas, burns his house down, then takes to the air in his Piper Dakota plane and crashes it into an Austin office building in an apparent attempt to destroy the large IRS office inside. Stack dies in the crash, as does IRS manager Vernon Hunter. Thirteen others are wounded, two critically. IRS revenue officer Peggy Walker, who is sitting at her desk when Stack’s plane crashes into the building, will later tell a reporter: “It felt like a bomb blew off. The ceiling caved in and windows blew in. We got up and ran.” IRS agent William Winnie says he was on the third floor of the building when he saw a light-colored, single engine plane coming toward the building. “It looked like it was coming right in my window,” Winne tells reporters. He says the plane veered down and smashed into the lower floors. “I didn’t lose my footing, but it was enough to knock people who were sitting to the floor,” he recalls. Two days before his flight, Stack, a software engineer, posted an angry rant on his personal Web site. “Nothing changes unless there is a body count,” he said, and went on to blast corporations, the Catholic Church, and bailouts for Wall Street. Stack wrote about the “storm raging in my head” and railed against taxation without representation. “Anyone who really stands up for that principal is promptly labeled a ‘crackpot,’ traitor, and worse,” he wrote. He expressed his anger at the “handful of thugs and plunderers [that] can commit unthinkable atrocities,” including bailed-out General Motors executives and the drug and insurance companies who “are murdering tens of thousands of people a year and stealing from the corpses and victims they cripple.” He hopes that “the American zombies wake up and revolt.” He concluded: “Violence not only is the answer, it is the only answer. I know I’m hardly the first one to decide I have had all I can stand.… I saw it written once that the definition of insanity is repeating the same process over and over and expecting the outcome to suddenly be different. I am finally ready to stop this insanity. Well, Mr. Big Brother IRS man, let’s try something different; take my pound of flesh and sleep well. The communist creed: From each according to his ability, to each according to his need. The capitalist creed: From each according to his gullibility, to each according to his greed.” The note was signed, “Joe Stack (1956-2010).” Before the attack is determined not to be foreign terrorism, at least two Texas Air National Guard F-16 fighter jets are scrambled in Houston, and President Obama is briefed. (Kennedy 2/18/2010; DeGuerin 2/18/2010; Katz 2/18/2010; Associated Press 2/19/2010; Your News Now 2/25/2010) The press soon reprints the entire posting, which the Associated Press calls “a rambling anti-government manifesto.” (Katz 2/18/2010; Associated Press 2/19/2010) Federal authorities find a note in Stack’s car, parked at the Georgetown Airport where he took off; the note says there is a bomb in the airport. The FBI investigates and finds no bomb. (Katz 2/18/2010) Stack used to play in a rock band; Pam Parker, whose husband leads the band, says Stack is usually “easy-going,” and though he “talked politics like everyone[, he] didn’t show any obsession.” The Web posting “sounded like his voice, but it was nothing I ever heard him say. Clearly there was crazy in him but it must have been way in the back of his head, it wasn’t who Joe was.” Patrick Beach, who also played in the band with Stack, tells a reporter, “I talked to a lot of people who knew him better than I did, and no one saw anything like this coming.” Beach says it is hard to comprehend how Stack, whom Beach says loved his wife and stepdaughter, could be the same person who wanted to “commit mass murder.” (Martinez 2/18/2010; Associated Press 2/19/2010) According to Stack’s father-in-law Jack Cook, Stack has a “hang-up” about the IRS, and his marriage to his wife Sheryl is strained; Cook says the night before Stack’s attack on the IRS building, his wife had taken her daughter to a hotel to get away from Stack. (Associated Press 2/19/2010) The press later learns that Stack is in the middle of an audit for failing to report income, in a case centered around his “Universal Life Church,” a “home church” founded by Stack and his wife. Stack had declared the church a tax shelter in violation of federal law, and had been ordered by the court to pay over $14,000 in back taxes along with an undisclosed amount in penalties, fines, and interest. (Your News Now 2/25/2010)