This page can be viewed at http://www.historycommons.org/entity.jsp?entity=smart_girl_politics_1

Smart Girl Politics was a participant or observer in the following events: 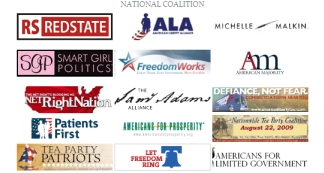 Screenshot of the bottom of Recess Rally’s home page, taken August 22, 2009. [Source: Recess Rally (.com)]MSNBC host Rachel Maddow examines an organization called “Recess Rally,” which is promoting anti-health care protests over the Internet, providing information about upcoming “town hall” forums hosted by Democratic lawmakers, and proclaiming, “We the people say no to socialized health care.” Maddow gives some information on who is organizing Recess Rally. At the bottom of Recess Rally’s home page, a number of sponsors are listed, including conservative blogger and Fox News commentator Michelle Malkin, and conservative blogs such as RedState and Smart Girl Politics.
Funded by Corporate Lobbying Firms, Corporate Interests - Other sponsoring organizations are less easily identifiable as citizen organizations. American Majority is a lobbying organization headed by Ned Ryun, a former speechwriter for President George W. Bush; many of the organization’s senior officials are veterans of the Bush-Cheney 2004 presidential campaign, former Republican lawmakers, and conservative lobbyists. American Majority is itself an offshoot of another organization, the Sam Adams Alliance. That organization is headed by a former executive director of the Illinois State Republican Party, and by a former Dow Chemicals engineer who also heads a large conservative think tank. Another sponsor of Recess Rally is a group called Let Freedom Ring, whose founder provided the funding for the 2008 Republican campaign ads that used footage of the 9/11 attacks to promote the Iraq war. Another sponsor was responsible for the 2004 “Swift Boat” campaign advertisements that besmirched then-presidential candidate Senator John Kerry (D-MA). Two other groups sponsor Recess Rally: Americans for Prosperity (AFP—see May 29, 2009, July 27, 2009, and August 1, 2009) and its subsidiary, Patients First (see July 23, 2009, July 27, 2009, and August 6, 2009). AFP runs Patients First, which is busing people around the country to demonstrate against health care reform, and another “grassroots” organization, Patients United Now (PUN). Maddow says that groups like these are “experts at fake grassroots campaigns that promote corporate interests.” (AFP president Tim Phillips will call the buses “really good props”—see August 6, 2009.)
Sincere Americans Protesting at Direction of Corporate Interests, PR Firms - Noting that AFP is headed by, among others, oil billionaire David Koch and longtime Republican fund-raiser Art Pope, Maddow says: “This oil industry and Republican operative millionaires’ club is, according to the Republican Party… just average, middle-class Americans—just regular American folks sitting around the kitchen table, thinking about whether they can get away with saying that the government continuing its long standing policy of encouraging living wills is really a secret plot to kill old people (see November 23, 2008, January 27, 2009, February 9, 2009, February 11, 2009, February 18, 2009, May 13, 2009, June 24, 2009, June 25, 2009, July 10, 2009, July 16, 2009, July 17, 2009, July 21, 2009, July 23, 2009, July 23, 2009, July 23, 2009, July 23-24, 2009, July 24, 2009, July 28, 2009, July 28, 2009, July 28, 2009, and July 31, 2009 - August 12, 2009). Americans are showing up at these events to shout down the discussion and to chase their congressmen and they are enraged. And they’re enraged at least in part because they’re being riled up by over-the-top, fabricated conspiracy theories about health care. And they’re being directed and orchestrated by the corporate interests that do this for a living and do it very well. RecessRally.com is not some organic outgrowth of American anger. This is how corporate America creates the illusion of a grassroots movement to support their own interests. This is what they do. They are professionals. This is an industry. To talk about these town hall events as some organic outpouring of average American folks who have concerns about health care is to be willfully blind as to what is really going on—which is professional PR operatives generating exploitive, manufactured, strategically deployed outrage in order to line their own pockets. These PR spinmeisters get paid a lot of money for doing it. The corporations they work for get to kill legislation that would hurt their profits. And the real people who they launch into these town hall settings after they’re told that health care reform is a secret commie plot to kill old people and to mandate sex changes—those real people get more and more and more angry, and more and more and more alienated. And ultimately, they get left, like the rest of us, with a health care system that is broken and doesn’t work in the interests of the American people, but does work in the interests of the corporations that profit from the way the system is now. This is professional, corporate-funded, Republican staffed PR, and it should be reported as such.” (Recess Rally 8/2009; MSNBC 8/6/2009)