This page can be viewed at http://www.historycommons.org/entity.jsp?entity=stephen_oake_1

Stephen Oake was a participant or observer in the following events: 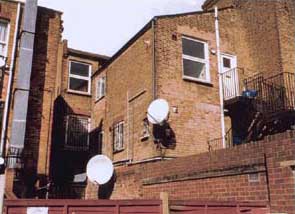 Kamal Bourgass’s flat in Wood Green, north London. [Source: BBC]Metropolitan Police raid a flat in Wood Green, north London, and discover a locked bag in a room occupied by an Islamist militant named Kamal Bourgass. An illegal immigrant from Algeria, Bourgass had arrived in Britain, hidden in a truck, in 2000. Using several false names, he remained in the country after failing to get asylum in December 2001, despite being fined for shoplifting in 2002 (see July 2002). (Carrell and Whitacker 4/17/2005) In addition, police had discovered a false passport for Bourgass in a raid on a storage depot in Wembley, north London, on June 22, 2002. (BBC 4/13/2005)
'Kitchen Chemistry' - The bag contains an envelope with instructions in Arabic for manufacturing poisons and explosives, as well as lists of chemicals. These “poison recipes” are in Bourgass’s writing. The envelope has the address of the Finsbury Park mosque with the name of “Nadir,” a name which Bourgass also used. Other discoveries include a cup containing apple seeds, cherry stones, nail polish remover, and a bottle of acetone. The search also uncovers 20 castor beans and £14,000 in cash. (Riddell 4/17/2005) In addition, there are stolen bottles of mouthwash and several toothbrushes, which are still in their packaging. The packaging appears to have been tampered with, indicating the plan may have been to poison the toothbrushes and then replace them on shop shelves. (O'Neill and McGrory 2006, pp. 245) Police announce that they have discovered a “poisons laboratory” that contains recipes for ricin, toxic nicotine, and cyanide gas weapons. (Riddell 4/17/2005) However, a senior policeman will later be dismissive of the level of the poisons, calling what is found “garden shed, kitchen chemistry.” (O'Neill and McGrory 2006, pp. 245)
Other Arrests - Other flats are raided and seven North Africans are arrested. Six men are arrested on January 5 in north and east London and another man is arrested on January 8 in central London. (Fox News 1/8/2003) The arrests include a 17-year-old. Police uncover additional poison recipes, false papers, and computer discs with bomb-making instructions.
Bourgass Murders Police Officer - Bourgass had been named as ringleader and other Algerians as co-conspirators in the alleged plot in an intelligence report passed to British officials from Algerian security forces. This report was the result of the interrogation of alleged al-Qaeda operative Mohammed Meguerba (see September 18, 2002-January 3, 2003). Bourgass is not present during the Wood Green raid. However, on January 14, a raid on a flat in Crumpsall Lane, Manchester, seeking another terror suspect, uncovers Bourgass and alleged conspirator Khalid Alwerfeli. After a violent struggle, Bourgass stabs and murders policeman Stephen Oake and wounds several other police officers. (Carrell and Whitacker 4/17/2005) 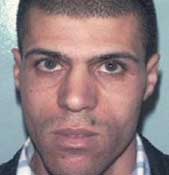 Kamal Bourgass [Source: BBC]After an 11-week trial at the Old Bailey, Kamal Bourgass is sentenced to life imprisonment, with a minimum of 22 years, for murdering DC Stephen Oake during a raid on a flat in Crumpsall Lane, Manchester, as part of the investigation into the alleged ricin plot in north London (see January 5, 2003). The sentence is kept secret due to the impending trial of Bourgass and others for the alleged plot, where Bourgass will only be found guilty on a secondary charge (see April 8-12, 2004). (Carrell and Whitacker 4/17/2005)