This page can be viewed at http://www.historycommons.org/entity.jsp?entity=steve_gabott_thomas_1

Steve Gabott Thomas was a participant or observer in the following events: 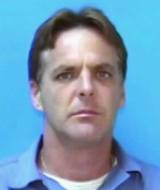 George Loeb. [Source: World Church of the Creator]George Loeb, a minister for the white supremacist Church of the Creator (COTC—see 1973 and 1982-1983), is arrested and charged with murdering African-American Gulf War veteran Harold Mansfield Jr. in a Neptune, Florida, parking lot two weeks ago.
Confrontation and Murder - Loeb nearly sideswept Mansfield’s car in the parking lot of a local shopping center, and Mansfield honked his horn at Loeb. The two argued before Mansfield drove away. Loeb then drove to a convenience store, where he bought two six-packs of beer, gave the cashier a card reading “White People Awaken. Save the White Race,” and, according to the cashier, angrily shouted racist epithets and statements while in the store. Meanwhile, Mansfield and a friend returned to the parking lot to confront Loeb. The two resumed their argument. (Anti-Defamation League 1993; Anti-Defamation League 7/6/1999; Southern Poverty Law Center 9/1999) According to witnesses, Loeb provoked Mansfield with racial taunts and epithets. (Smothers 5/19/2006) Mansfield brandished a brick, and Loeb pulled out a .25-caliber semiautomatic handgun. Mansfield attempted to retreat, but Loeb shot him in the chest. Loeb then fired at Mansfield’s friend, who fled to the grocery store to escape Loeb and call for help. By the time the friend returned to the car, Mansfield was almost dead. He died shortly thereafter.
Previous Arrests for Racially Motivated Altercations - After Loeb’s arrest, the press learns of a previous arrest in November 1990, when Loeb followed an African-American woman and her daughter, called the woman a racial slur, and threatened to shoot her. In January 1991, Loeb was arrested again for starting a fistfight with an African-American neighbor; he was charged with disorderly intoxication and resisting arrest. In April 1991, Loeb wrote a letter to the Fort Pierce Tribune stating his racist views (see April 1991). When they arrest him for Mansfield’s murder, police seize over 1,600 pages of personal correspondence and racist propaganda from Loeb’s apartment, including a document written to a Ku Klux Klan member that reads in part: “The frequent use of the word n_gger should lead to a widespread and violent black uprising that should give whites (and possibly police) the opportunity to kill large numbers of them with impunity. It is our feeling as Creators [COTC members] that shrinking the numbers of blacks worldwide is one of the highest priorities.”
Arrest in New York - Loeb and his wife Barbara left their Neptune condominium and fled Florida within hours of the shooting, assisted by fellow COTC member Steve Gabott Thomas. (Thomas is one of four Army soldiers convicted of raping and murdering a Vietnamese woman in 1966, a crime that formed the basis of the 1989 film Casualties of War. He served four years of a life sentence before being released on parole.) On June 6, 1991, the couple is arrested in Poughkeepsie, New York, after George Loeb assaults a grocery store security guard who caught him trying to steal a package of sandwich meat. Officers search their car and find two smoke bombs, a .22-caliber rifle with a scope and extra magazines, a 12-gauge shotgun, and approximately 1,000 rounds of assorted ammunition. Additionally, Barbara Loeb’s purse contains a handgun and ammunition.
Convictions - Barbara Loeb is arrested for weapons possession, and later sentenced to a year in prison. George Loeb is charged with murder and extradited to Florida. Loeb will claim that he killed Mansfield in self-defense, and will tell the jury that he contemplated fleeing to Canada because it is a “predominantly white country” where he might expect to be treated more impartially. He will be found guilty of first-degree murder and sentenced to 25 years without parole. Loeb will attempt to kill himself in the hours after his conviction; he will tell police, “I want to die because the whole world is an _sshole.” Thomas will be convicted of being an accessory after the fact to the murder and sentenced to a year’s probation, likely because he helped police in capturing the Loebs.
Martyrdom - COTC members will attempt to portray Loeb as a hero and martyr, claiming that he killed Mansfield in self-defense and is a hero of white people everywhere. However, COTC leader Ben Klassen will not publicly endorse the murder, telling a reporter: “I am no more responsible for [the murder] than the pope is responsible for all the Catholic felons in prison.… Not at all.” Klassen will also tell the reporter that Thomas, who aided the Loebs’ flight, will no longer be a COTC member. However, Thomas will continue to be a prominent member of COTC. (Anti-Defamation League 1993; Anti-Defamation League 7/6/1999; Southern Poverty Law Center 9/1999)