This page can be viewed at http://www.historycommons.org/entity.jsp?entity=steve_rosen

Positions that Steve Rosen has held:

Steve Rosen was a participant or observer in the following events: 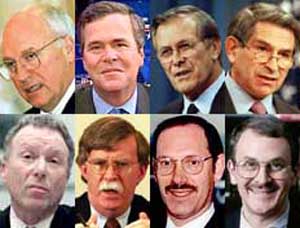 )
Plans to Overthrow Iraqi Government - The report calls itself a “blueprint for maintaining global US preeminence, precluding the rise of a great power rival, and shaping the international security order in line with American principles and interests.” The plan shows that the Bush team intends to take military control of Persian Gulf oil whether or not Saddam Hussein was in power and should retain control of the region even if there is no threat. It says: “The United States has for decades sought to play a more permanent role in Gulf regional security. While the unresolved conflict with Iraq provides the immediate justification, the need for a substantial American force presence in the Gulf transcends the issue of the regime of Saddam Hussein.” The report calls for the control of space through a new “US Space Forces,” the political control of the internet, the subversion of any growth in political power of even close allies, and advocates “regime change” in China, North Korea, Libya, Syria, Iran and other countries. It also mentions that “advanced forms of biological warfare that can ‘target’ specific genotypes may transform biological warfare from the realm of terror to a politically useful tool” (see February 7, 2003). (Project for the New American Century 9/2000

; Mackay 9/7/2002)
Greater Need for US Role in Persian Gulf - PNAC states further: “The United States has for decades sought to play a more permanent role in Gulf regional security. While the unresolved conflict with Iraq provides the immediate justification, the need for a substantial American force presence in the Gulf transcends the issue of the regime of Saddam Hussein.”
'US Space Forces,' Control of Internet, Subversion of Allies - PNAC calls for the control of space through a new “US Space Forces,” the political control of the Internet, and the subversion of any growth in political power of even close allies, and advocates “regime change” in China, North Korea, Libya, Syria, Iran, and other countries.
Bioweapons Targeting Specific Genotypes 'Useful' - It also mentions that “advanced forms of biological warfare that can ‘target” specific genotypes may transform biological warfare from the realm of terror to a politically useful tool.”
'A New Pearl Harbor' - However, PNAC complains that thes changes are likely to take a long time, “absent some catastrophic and catalyzing event—like a new Pearl Harbor.” (Johnson 1/12/2003)
Bush Will Claim a 'Humble' Foreign Policy Stance - One month later during a presidential debate with Al Gore, Bush will assert that he wants a “humble” foreign policy in the Middle East and says he is against toppling Saddam Hussein in Iraq because it smacks of “nation building” (see October 11, 2000). Around the same time, Cheney will similarly defend Bush’s position of maintaining President Clinton’s policy not to attack Iraq, asserting that the US should not act as though “we were an imperialist power, willy-nilly moving into capitals in that part of the world, taking down governments.” (Masters 1/12/2002) Author Craig Unger will later comment, “Only a few people who had read the papers put forth by the Project for a New American Century might have guessed a far more radical policy had been developed.” (Unger 3/15/2004) A British member of Parliament will later say of the PNAC report, “This is a blueprint for US world domination—a new world order of their making. These are the thought processes of fantasist Americans who want to control the world.” (Mackay 9/7/2002) Both PNAC and its strategy plan for Bush are almost virtually ignored by the media until a few weeks before the start of the Iraq war (see February-March 20, 2003).

The FBI and Justice Department quietly open an investigation into whether Representative Jane Harman (D-CA), the ranking Democrat on the House Intelligence Committee, improperly colluded with the American Israel Public Affairs Committee (AIPAC) to win reappointment as the committee’s ranking member. The investigation is not revealed to the public until October 2006 (see October 20, 2006). The investigation centers on allegations that Harman and AIPAC arranged for wealthy supporters to lobby House Minority Leader Nancy Pelosi (D-CA) on Harman’s behalf. The case is an outgrowth of a probe that has already led to the felony conviction of former DIA official Larry Franklin, who pled guilty to giving classified information to two AIPAC lobbyists (see October 5, 2005), and the lobbyists, Steve Rosen and Keith Weissman, who still face charges of passing that information on to Israel (see April 13, 1999-2004). The investigation has now expanded to determine if Harman’s campaign to persuade Pelosi to reappoint her to the committee may have involved AIPAC, and whether Harman promised to return the favor by using her influence to persuade the Justice Department to ease up on the AIPAC lobbyists. Reporter Timothy Burger will write: “If that happened, it might be construed as an illegal quid pro quo, depending on the context of the situation. But the sources caution that there has been no decision to charge anyone and that it is unclear whether Harman and AIPAC acted on the idea.” Both Harman and Pelosi are outspoken supporters of Israel, and have praised AIPAC for its efforts to further cement ties between Israel and the US. However, Congressional sources will say that Pelosi is furious at attempts by major donors to lobby on behalf of Harman. The LA Weekly reported in May that Harman “had some major contributors call Pelosi to impress upon her the importance of keeping Jane in place. According to these members, this tactic, too, hasn’t endeared Harman to Pelosi.” Another powerful figure has lobbied for Harman: entertainment industry billionaire Haim Saban, who made his fortune through the Mighty Morphin Power Rangers children’s entertainment franchise. It is unclear whether Saban had any contact with AIPAC, and if his efforts to lobby on Harman’s behalf were part of a larger, more orchestrated plan. (Burger 10/20/2006) When the story becomes public in October 2006, Harman will deny any improper or illegal conduct (see October 20, 2006). The investigation will eventually be dropped, supposedly for “lack of evidence.” In April 2009, evidence will surface that the NSA wiretapped Harman discussing a quid pro quo with a suspected Israeli agent, and that the investigation was not dropped because of lack of evidence, but because of the intervention of Attorney General Alberto Gonzales (see October 2005, Late 2005, and April 19, 2009). (Stein 4/19/2009)

October 2005: Democrat Wiretapped by Federal Agency: Promises to Intervene in Espionage Case in Return for Help in Securing Chairmanship

Representative Jane Harman (D-CA) is recorded telling a suspected Israeli agent that she would intervene with the Justice Department to try to get charges against two Israeli lobbyists reduced. In return, the Israeli agent promises to help Harman secure the chairmanship of the House Intelligence Committee. The Israeli agent will remain unidentified; the two lobbyists, Steve Rosen and Keith Weissman, are charged with espionage after they allegedly passed along classified information to the American Israel Public Affairs Committee (AIPAC—see April 13, 1999-2004). The conversation between Harman and the Israeli agent is recorded on an wiretap, reportedly by the NSA, mounted as part of a federal investigation into AIPAC’s potential espionage operations against the US (see October 5, 2005). According to transcripts of the wiretapped conversation, Harman agrees to “waddle into” the AIPAC case “if you think it’ll make a difference.” The Israeli agent asks Harman if she could speak with Attorney General Alberto Gonzales on Rosen’s and Weissman’s behalf. Harman replies that Gonzales might not cooperate, because he “just follows White House orders,” but other officials might be more pliable. In return, the Israeli agent promises to contact House Minority Leader Nancy Pelosi (D-CA) and attempt to persuade her to name Harman as chairwoman of the Intelligence Committee if the Democrats win control of the House in the November 2006 elections. Harman tells the agent, “This conversation doesn’t exist,” and hangs up. The contents of the conversation will later be confirmed by three separate sources, including two former senior national security officials. (Stein 4/19/2009) Reporter Marc Ambinder will later write that Harman’s conversation may have been recorded by the FBI, and not the NSA, as part of the its investigation into Rosen and Weissman. (Ambinder 4/20/2009)

Rudolph Giuliani, the former New York City mayor who is running a campaign for the Republican presidential nomination centered on strong national security and aggressive foreign policy, surrounds himself with a group of hardline neoconservative advisers:

Neoconservative eminence Norman Podhoretz (see October 28, 2007). Podhoretz says, “I decided to join Giuliani’s team because his view of the war [on terror]—what I call World War IV—is very close to my own.” Podhoretz has said he “hopes and prays” President Bush attacks Iran. (Hirsh 10/15/2007) Giuliani says of Podhoretz’s advocacy of US military action against Iran, “From the information I do have available, which is all public source material, I would say that that is not correct, we are not at that stage at this point. Can we get to that stage? Yes. And is that stage closer than some of the Democrats believe? I believe it is.” (Cooper and Santora 10/25/2007)

Michael Rubin, a former Pentagon official and current American Enterprise Institute scholar who argues that Secretary of State Condoleezza Rice’s diplomacy is “dangerous” and signals American “weakness” to Tehran and advocates revoking the US ban on assassination;

Former senator Bob Kasten (R-WI), who often sided with neocons during the Reagan years; and

Daniel Pipes, who opposes a Palestinian state and believes America should “inspire fear, not affection.” Pipes has advocated the racial profiling of Muslim-Americans, argued that the internment of Japanese-Americans during World War II was not morally offensive, and has, in his own words, advocated “razing [Palestinian] villages from which attacks are launched” on Israel. (Hirsh 10/15/2007; Cooper and Santora 10/25/2007; Harnden 11/1/2007) Pipes is even “further out ideologically than Norman Podhoretz,” writes Harper’s Magazine reporter Ken Silverstein. (Silverstein 8/28/2007)
Support for Israel's Likud - Some Giuliani advisers, including Kasten, former State Department aide and political counselor Charles Hill, and Islam expert Martin Kramer (who has attacked US Middle East scholars since 9/11 for being soft on terrorism) indicate Giuliani’s alignment with the right-wing hawks of Israel’s Likud Party, notes Forward Magazine: pro-Israeli lobbyist Ben Chouake says Giuliani is “very serious about his approach to ensuring the security and safety of Israel.” (Siegel 7/18/2007) Giuliani has a long record of supporting Israel’s right wing; as early as 1995, he publicly insulted Palestinian leader Yasser Arafat, and in 2001, told an Israeli audience that the US and Israel are “bound by blood.” (Hirsh 10/15/2007) Giuliani says he wants to expand the North American Treaty Organization (NATO) and invite Israel to join. (Cooper and Santora 10/25/2007) A Republican political operative calls Giuliani’s advisers “red-meat types” chosen to cloak Giuliani’s near-complete lack of foreign experience. The operative says that Giuliani is also trying to head off criticism for his departure from the Iraq Study Group (see December 2006) before it finished its report. Republican attorney Mark Lezell, who supports Giuliani opponent Fred Thompson, says, “The concern with that particular team is that they have been at the forefront of policies that have yet to succeed and could well qualify as political baggage.” (Siegel 7/18/2007)
'Out-Bushing Bush' - Not all of Giuliani’s foreign affairs advisers are neocons. His policy coordinator, Hill, takes a more centrist view and says, perhaps disingenuously, “I don’t really know much about neoconservatives,” adding, “I don’t know of a single person on the campaign besides Norman [Podhoretz] who is a self-identified, card-carrying member of this neocon cabal with its secret handshakes.” Hill says the US should “deliver a very clear message to Iran, very clear, very sober, very serious: they will not be allowed to become a nuclear power,” but stops short of advocating a military solution. Richard Holbrooke, a foreign policy adviser to Democratic candidate Senator Hillary Clinton (D-NY), says jocularly that Giuliani is “positioning himself as the neo-neocon.” Dimitri Simes of the Nixon Center says of Giuliani’s team, “Clearly it is a rather one-sided group of people. Their foreign-policy manifesto seems to be ‘We’re right, we’re powerful, and just make my day.’ He’s out-Bushing Bush.” (Hirsh 10/15/2007; Lake 10/25/2007)