This page can be viewed at http://www.historycommons.org/entity.jsp?entity=susan_paris_1

Susan Paris was a participant or observer in the following events: 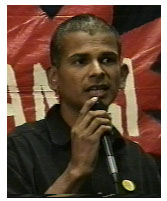 Rod Coronado. [Source: Fur Commission (.com)]Rod Coronado, an animal rights advocate affiliated with the Animal Liberation Front (ALF—see 1976) and a Vancouver organization, the Sea Shepherd Conservation Society, is jailed for his roles in a 1987 arson at a University of California-Davis veterinary laboratory and a 1992 firebombing at an animal research laboratory at Michigan State University. The UC-D bombing caused over $3.5 million in property damage. Coronado will serve three and a half years in prison. He will become one of ALF’s public representatives, lecturing around the country on behalf of ALF and other extremist animal rights and environmentalist groups (see 1970s). Coronado will tell a Michigan State University reporter, “I wish I could do it again,” referring to the MSU bombing. “I have absolutely no regrets, and I hope the same thing continues to happen at MSU and every other college campus that does animal research.” (Anti-Defamation League 2005) The third edition of the ALF Primer will quote an anti-vivisection activist in defense of Coronado. Susan Paris, the president of the above-ground organization Americans for Medical Progress (AMP) will say: “Because of terrorist acts by animal activists like Coronado, crucial research projects have been delayed or scrapped. More and more of the scarce dollars available to research are spent on heightened security and higher insurance rates. Promising young scientists are rejecting careers in research. Top-notch researchers are getting out of the field.” A 1993 report to Congress (see 1979-1993) made a similar observation, stating, “Where the direct, collateral, and indirect effects of incidents such as this are factored together, ALF’s professed tactic of economic sabotage can be considered successful, and its objectives, at least towards the victimized facility, fulfilled.” (Animal Liberation Front 2002