This page can be viewed at http://www.historycommons.org/entity.jsp?entity=suzanne_kosmas_1

Suzanne Kosmas was a participant or observer in the following events: 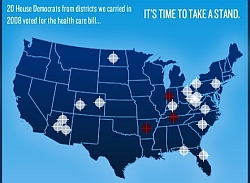 A portion of Palin’s image, which puts gunsights on 20 Congressional districts, and names the Democrats who represent them. [Source: Sarah Palin / Huffington Post]Former Alaska Governor Sarah Palin (R-AK), a Fox News contributor and generally accepted leader of the far-right Tea Party movement, posts an image on her Facebook page that depicts gunsights (crosshairs) on 20 Congressional districts and lists the Democrats who currently represent them. The image reads: “20 House Democrats from districts we [Republicans] carried in 2008 voted for the health care bill.… IT’S TIME WE TAKE A STAND. Let’s take back the 20 together!” The liberal Huffington Post calls Palin’s image and rhetoric “decidely militant.” Conservative commentator Elizabeth Hasselback calls the use of gunsight imagery “despicable,” saying: “I think the way some Republicans are handling this is nothing more than purely despicable. The names that are next to and being highlighted by those crosshairs—I think it’s an abuse of the Second Amendment. I also feel as though every single person on here is a mother, a father, a friend, a brother, a sister, and to take it to this level is—it’s disappointing to see this come from the party, and I would hope that leaders like Sarah Palin would end this.” The image lists the 20 Democrats by name (noting that three are not running for re-election, and marking their districts in red):
Vic Snyder (D-AR, retiring)
Ann Kirkpatrick (D-AZ)
Harry Mitchell (D-AZ)
Gabrielle Giffords (D-AZ)
John Salazar (D-CO)
Betsy Markey (D-CO)
Allen Boyd (D-FL)
Suzanne Kosmas (D-FL)
Brad Ellsworth (D-IN, retiring)
Baron Hill (D-IN)
Earl Pomeroy (D-AL)
Charlie Wilson (D-OH)
John Boccieri (D-OH)
Kathy Dahlkemper (D-PA)
Christopher Carney (D-PA)
John Spratt (D-SC)
Bart Gordon (D-TN, retiring)
Thomas Perriello (D-VA)
Alan Mollohan (D-WV)
Nick Rahall (D-WV) (Huffington Post 3/24/2010; Huffington Post 3/26/2010)
After one of the listed Democrats, Gabrielle Giffords (D-AZ), is shot in the head by an apparent assassin in January 2011, Palin’s staff will remove the image from Palin’s Facebook page and issue the claim that the gunsights were actually intended to represent surveyor’s marks. However, Palin herself will call the gunsights “bullseyes” that “target[ed]” her opponents. After the November 2010 election, when all but two on the list have either retired or been defeated, Palin will post on Twitter: “Remember months ago ‘bullseye’ icon used 2 target the 20 Obamacare-lovin’ incumbent seats? We won 18 out of 20 (90% success rate;T’aint bad).” Washington Post reporter Glenn Kessler will write: “[I]t’s silly for her aides to claim she did not intend these to be gunsights. They can defend it, or apologize, but they shouldn’t pretend otherwise.” (Tammy Bruce 1/8/2011; Kessler 1/11/2011)