This page can be viewed at http://www.historycommons.org/entity.jsp?entity=tawhid_and_jihad_1

Tawhid and Jihad was a participant or observer in the following events: 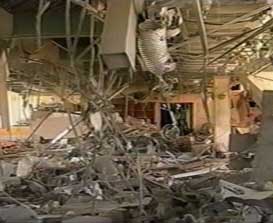 Damage from one of the Sharm el-Sheikh bombs. [Source: National Geographic]The Egyptian resort town of Sharm el-Sheikh is hit by three simultaneous suicide bombings. At least 88 are killed and over 150 are wounded. The town, located on the southern tip of the Sinai Peninsula, is popular with Westerners and many of the victims are from various European countries. The four star Ghazala Gardens hotel is directly hit, while the other two bombers are stopped at security checkpoints and forced to detonate themselves in areas without many tourists. (BBC 7/23/2005; Howie and Ross 7/26/2005) A previously unknown Egyptian group called Tawhid and Jihad takes credit for the attacks, saying they were done on orders from al-Qaeda leaders Osama bin Laden and Ayman al-Zawahri. The Egyptian government received a warning about an imminent terror attack in the town several days in advance, but apparently mistakenly believed it would target casinos instead of hotels. (Innes 7/27/2005)