This page can be viewed at http://www.historycommons.org/entity.jsp?entity=texas_republican_party_1

Texas Republican Party was a participant or observer in the following events:

The 1990 federal census awards Texas three additional seats in its US Congressional delegation. The Democratic Party controls 19 of the current 27 seats, as it does the Texas legislature and the governorship, but population shifts and other factors have moved Texas in an increasingly Republican direction. Texas Democrats, led by Representative Martin Frost, respond by redrawing the electoral district map, as is the state’s responsibility under the Constitution, but Republicans and other critics say the new map unduly favors Democrats and is designed to ensure that Democrats retain a majority of Texas’s US Congressional delegation. Texas Republicans challenge the remapping in court, calling it “gerrymandering,” but the case is not ruled in their favor. (Hulse 5/15/2003; FindLaw 6/28/2006)

The 2000 federal census awards Texas two additional seats for its US Congressional delegation. Ten years ago, when the census awarded Texas three additional seats, Texas Democrats allegedly “gerrymandered” the state’s electoral district map to ensure that Democrats sent a majority of Democrats to the US Congress (see 1990 - 1991). Now, Republicans control the governorship and the Texas Senate, but Democrats retain control of the Texas House. The divided legislature is unable to pass a redistricting scheme as mandated by the Constitution, and as a result the entire redistricting affair is decided in court. A three-judge federal district court attempts to draw a “neutral” district map, attempting to produce a map that does not clearly favor one party over another. The court produces Plan 1151C, places the two new seats in high-growth areas, and favors county and voting precinct boundaries in the map. The new map results in a 17-15 Democratic majority in the Texas delegation to the US House, contrasting with a 59 percent to 40 percent Republican voting pattern in the state. Critics complain that the court’s plan essentially leaves the Democrats’ 1990 “gerrymander” in place. (FindLaw 6/28/2006) Critics’ assertions are bolstered by the fact that Texas Representative Martin Frost, a Democrat, was primarily responsible for the previous map that was used by the court. (Hulse 5/15/2003)

For 13 years, Texas Republicans have complained that Texas Democrats have “gerrymandered” the state’s electoral district to give Democrats an undue representation in the state’s US House delegation (see 1990 - 1991 and 2000-2002). Now, with Republicans in control of both houses of the state legislature, they decide to redistrict the state to favor Republican representation in Congress. In 2002, Democrats hold a 17-15 edge in US Representatives. The decision is unusual inasmuch as states usually only redraw their district boundaries once a decade, in concurrence with the federal census. Democrats wage a bitter battle against the Republican redistricting efforts, even fleeing the state for a time to prevent the legislature from reaching a quorum (see May 12-15, 2003), but Republicans, led by House Majority Leader Tom DeLay (R-TX), eventually win out, and the Texas legislature enacts a new redistricting plan, Plan 1347C, that concentrates large numbers of Democrats, including minority voters, in a relatively small number of districts and gives Republicans a majority of prospective voters in a much larger number of more sparsely populated districts. In the November 2004 elections, the plan works as envisioned: Republicans have a 21-11 majority in the US Congressional delegation, and obtain a 58 percent to 41 percent edge in statewide voting results. Even before the elections, a number of organizations and individuals file a lawsuit challenging the legality of the redistricting map under the Voting Rights Act (VRA—see August 6, 1965, 1970, 1975, April 22, 1980, and June 29, 1989), charging that the plan unlawfully dilutes racial minority voting strength and is designed to maximize partisan advantage at the voting booths, in essence gerrymandering the state’s electoral districts. A district court finds the redistricting plan is essentially legal, but the Supreme Court vacates that decision and remands the case for reconsideration; the court again finds in favor of the plaintiffs, affirming the map as lawful. (Susswein 5/14/2003; Eggen 12/2/2005; FindLaw 6/28/2006; Oyez (.org) 2012) That decision will be substantially affirmed by the Supreme Court (see June 28, 2006). DeLay says that President Bush, the former governor of Texas, is squarely behind the redistricting efforts. After a Congressional leadership breakfast in May 2003, DeLay says he spoke briefly with Bush: “As I was walking out, I said, you know, that redistricting is ongoing. And he said, ‘Well, good, I’d like to see that happen.’” (Jackson 5/14/2003) During the battle over the redistricting, Texas Democrats insist that the new districts will not only illegally protect Republican majorities, but will dilute the impact of votes from outside cities and suburban areas. US Representative Max Sandlin (D-TX) tells a reporter: “This plan doesn’t just destroy Democratic representation… it destroys rural representation. East Texas has had tremendous battles with Dallas over water rights. It is absolutely ridiculous to have a Dallas Congress member represent East Texans concerning water rights. And you can go issue by issue.” Republicans from rural districts say they have no such worries. (Susswein 5/14/2003)

May 12-15, 2003: Texas Democratic Legislators Leave State to Block Passage of Controversial Redistricting Bill; Texas Republicans Use Federal Resources to Locate and ‘Apprehend’ Them 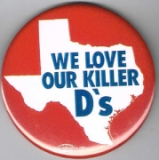 Talon News logo. [Source: Talon News / AmericaBlog (.com)]Media Matters, the left-leaning media watchdog organization, questions White House reporter Jeff Gannon’s credentials as well as the legitimacy of the Internet news organization he works for, Talon News. Media Matters is as yet unaware that Gannon’s true name is James Guckert, and that he has no journalistic experience and his livelihood is apparently made by moonlighting as a gay prostitute (see January 26, 2005). The organization shows that several Gannon/Guckert pieces for Talon News are little more than what it calls “reprints of Republican and Bush administration releases,” and demonstrates that Gannon is a frequent “lifesaver” for White House press secretary Scott McClellan, who regularly calls on Gannon/Guckert when he needs a safe question to allow him to get back on track. Media Matters has found out more about Talon News itself; it reports that the information unearthed “casts additional doubt on Talon’s claim to be a media outlet and raises questions about whether Gannon/Guckert should be a credentialed member of the White House press corps.” Talon News is owned by Bobby Eberle, a Texas Republican Party operative who also owns the conservative Internet organization “GOPUSA,” which proclaims itself to be a “conservative news, information, and design company dedicated to promoting conservative ideals.” Though Eberle claims that GOPUSA and Talon News are separate organizations, in fact they are not. Eberle is the owner and chief operator of both entities. Both domain names—“TalonNews.com” and “GOPUSA.com”—are registered to the same Pearland, Texas, street address, which appears to be Eberle’s home address. The domain name contact is Eberle’s GOPUSA email address. Most of the articles on Talon News’s Web site consist of short introductory paragraphs with “Read more” links that take the reader to a page that announces, “This story can be found on our #1 client—GOPUSA!” Readers are then redirected to the GOPUSA.com site. GOPUSA and Talon News are both staffed by Eberle, Gannon/Guckert, and several volunteers. Media Matters concludes that the two organizations are “virtually indistinguishable.” Interestingly, both Eberle and Gannon/Guckert post on the right-wing Internet forum Free Republic, and Gannon/Guckert has hosted a radio show on Radio Free Republic. Another poster once suggested that McClellan “appreciated” Gannon/Guckert’s questions “from the smirk he was trying to hold back,” and Gannon/Guckert responded, “It’s hard to say with Scott but he usually knows what he’s going to get from me.” None of the other volunteers on Talon News seem to have any journalistic experience, but all are heavily involved in Republican politics, including a high school student who is president of his school’s Young Republicans’ Club; the owner of the Wisconsin Conservative Digest; a county GOP chairman and campaign manager for a Maine Republican candidate for the House of Representatives; a South Carolina GOP campaign operative; and a Nebraska freelance writer who has worked as a speechwriter for conservative candidates and organizations. Members of GOPUSA’s board of directors have no more journalistic experience than the writers of Talon News, but all are active GOP operatives, consultants, and financial managers. (Foser 1/25/2005)