This page can be viewed at http://www.historycommons.org/entity.jsp?entity=timothy_jacob_wise_1

Timothy Jacob Wise was a participant or observer in the following events: 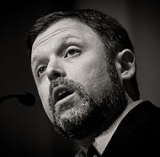 Tim Wise (L) and Laura Flanders during their interview. [Source: GRIT TV / Nation of Change (.org)]Progressive author and columnist Laura Flanders interviews author and activist Tim Wise, an expert on white supremacist ideology and movements. They begin by discussing President Obama’s incremental, “race-neutral” approach to solving racial problems in America, agreeing that Obama tends to believe that racial problems can best be alleviated by economic solutions. However, Wise says, “racial disparities that are caused by racial discrimination—by race-specific injury—can’t be solved with race-neutral analysis or race-neutral policy.” Wise says that long-term studies show that the single biggest reason why support for social safety-net programs has dropped so steadily in America over the last few decades has been the perception that those programs will be abused by minorities, a perception Wise says is shaped in part by racist beliefs. Ironically, that lack of citizen support, which has translated into a lack of governmental support, means that when white Americans need those programs themselves, they do not get the services they require; in the last decade, many more whites have begun to suffer economic plights, and they now need the programs they have largely opposed. Wise says that the liberal strategy of ignoring racism from the right, pretending it does not exist, and/or trying to “rise above it,” just gives the implied racism of conservatives like Rush Limbaugh and many “tea party” activists that much more influence and power. The more the idea of racism is openly addressed, Wise says, the less effective racial overtones and implications are in politics. Historically, Wise says, white Americans strongly support federally funded social programs as long as they do not perceive minorities as being the primary beneficiaries of those programs. After 1971-72, he says, the media began portraying the recipients of welfare, Medicaid, and other safety-net programs as largely African-American. Before, he says, the media usually showed whites in Appalachia, for example, with whites standing in soup-kitchen lines and so forth. When the media began portraying safety-net recipients as mostly minorities, white support of those programs began to plummet. Flanders turns the conversation to the “tea party” movement, and, after citing Wise’s recent article, “Imagine If the Tea Party Was Black” (see April 25, 2010), she asks about the racism that infuses much of the tea party’s ideology and activism (see April 25, 2010). Obviously, Wise says, if tea partiers were black, “they wouldn’t be able to surround lawmakers and scream at them at the top of their lungs like petulant children.” Even if one does not accept the allegations of racial slurs and spitting that have been made against tea partiers (see March 20, 2010), which Wise does accept as true, “just the notion that a thousand white people can get around a bunch of lawmakers, some of whom are white and some of whom are of color, and scream and yell at them and tell them how to vote…” It is inconceivable that black protesters and activists could “get away with that,” he says, “without being seen as criminals.” And the idea of Arab-Americans or Latinos trying to do something similar, he says, is even harder to conceive, he says: Arab-Americans would be vilified as terrorists, and Latinos would be smeared as illegal aliens. The political impact of the tea partiers has been far stronger than anything black and other minority civil rights and political pressure groups have been able to bring to bear. “In every sense,” he says, “the tea party is able to get away with things—say things, do things, make the kinds of statements about public leaders and officials—that no group of color could ever possibly do.” (GRIT TV 9/25/2010)