This page can be viewed at http://www.historycommons.org/entity.jsp?entity=tom_froling_1

Tom Froling was a participant or observer in the following events: 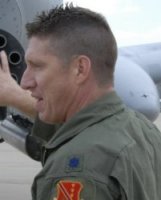 Douglas Champagne. [Source: David Kujawa / US Air Force]Although NORAD’s Northeast Air Defense Sector (NEADS) has contacted Selfridge Air National Guard Base in Michigan, reportedly to arrange that two of its F-16s be diverted from a training mission to intercept either Flight 93 or Delta Air Lines Flight 1989 (accounts conflict over which aircraft is concerned), the pilots of those jets apparently never receive an order to intercept a plane, and so return directly to their base. (Filson 2003, pp. 68, 71; Carroll 9/2006

) When they started heading back to Selfridge after completing their training mission, they began hearing “unusual radio traffic” as air traffic controllers began diverting flights from their original destinations. (Casey 9/6/2006)
Pilots Learn of Plane Hitting Pentagon - Froling will later recall: “Something strange was occurring and I couldn’t put my finger on what was happening. I could hear [the FAA’s] Cleveland Center talking to the airlines and I started putting things together and knew something was up.” (Filson 2003, pp. 68-70) Champagne hears an air traffic controller stating that a plane has crashed at the Pentagon. He then hears the Cleveland Center announcing a “demon watch,” which means pilots have to contact their operations center for more information.
Commander Asks if Pilots Have Used up Their Ammunition - When Champagne calls the Selfridge base, his operations group commander, General Michael Peplinski, wants to know if he and Froling have used up their ammunition during the training mission. Champagne will recall: “[Peplinski] asked if we had expended all our munitions and specifically asked if we had strafed. We replied that all ordnance was gone. I assumed we had strafed without clearance and had injured someone down range. We had no idea what was happening on the Eastern seaboard.” (Carroll 9/2006

; Casey 9/6/2006)
Pilots Directed to Return to Base - According to author Lynn Spencer, because a commander with the 127th Wing agreed to turn the two F-16s over to NEADS (see (9:55 a.m.) September 11, 2001), Champagne and Froling are instructed to call NEADS. When they do so, they are ordered to intercept Delta 1989. (Spencer 2008, pp. 178, 180, 188) But according to other accounts, they are “ordered south in case United Airlines 93 was targeting Chicago.” (ABC News 9/11/2002; Baker 3/27/2005) However, according to two reports based on interviews with Champagne, Peplinski only instructs the two pilots to return to their base and land on its auxiliary runway.
Pilots Apparently Not Ordered to Intercept Aircraft - Accounts based on interviews with the pilots will make no mention of the jets being directed to intercept Delta 1989 or Flight 93. According to Champagne, the air traffic controller’s announcement that an aircraft hit the Pentagon “was the only indication we received that other aircraft and buildings were involved.” Champagne will say that “he and his colleague never received orders to intercept [Flight 93] in any way.” The two pilots “had no ammunition… and only an hour’s worth of fuel remaining. And as they approached Selfridge amid the puzzling radio transmissions, they still were oblivious to what was transpiring.” (Filson 2003, pp. 68-70; Carroll 9/2006

) As Champagne pulls in his aircraft, his friend Captain Sean Campbell approaches and mouths the words to him: “It’s bad. It’s really, really bad.” (Carroll 9/2006