This page can be viewed at http://www.historycommons.org/entity.jsp?entity=united_iraqi_alliance_1

United Iraqi Alliance was a participant or observer in the following events: 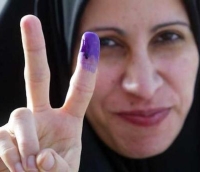 An Iraqi voter displays her purple finger for a reporter’s camera. [Source: Agence France-Presse]Elections for Iraq’s 275-member national assembly are held, the first democratic elections in Iraq in 50 years. Fifty-eight percent of Iraqis go to the polls to vote for a new government, the first national elections since Saddam Hussein’s overthrow. Iraqis proudly display their ink-dipped purple fingers as signs that they voted. In Washington, Republicans display their own enpurpled fingers as a sign of solidarity with President Bush and as a symbol of their pride in bringing democracy to Iraq. The Shi’ite-dominated United Iraqi Alliance (UIA) wins 48.2 percent of the vote, a coalition of two major Kurdish parties garners 25.7 percent, and a bloc led by interim Prime Minister Iyad Allawi wins only 13.8 percent. As expected, the Sunni parties capture only a fraction of the vote. (Shadid and Struck 2/14/2005; Unger 2007, pp. 327-329)
Shi'ite Turnout High, but Election Marred by Violence - Suicide bombers and mortar attacks attempt to disrupt the elections, killing 44 around the country, but voters turn out in large numbers regardless of the danger. Three cloaked women going to polls in Baghdad tell a reporter in unison, “We have no fear.” Another Iraqi tells a reporter: “I am doing this because I love my country and I love the sons of my nation. We are Arabs, we are not scared and we are not cowards.” (Associated Press 1/31/2005)
Sunni Boycott Undermines Legitimacy of Election Results - The political reality of the vote is less reassuring. Millions of Shi’ites do indeed flock to the polls, but most Sunnis, angered by years of what they consider oppression by US occupying forces, refuse to vote. Brent Scowcroft, the former foreign policy adviser held in such contempt by the administration’s neoconservatives (see October 2004), had warned that the election could well deepen the rift between Sunnis and Shi’a, and indeed could precipitate a civil war. Soon after the elections, Sunni insurgents will shift their targets and begin attacking Shi’ite citizens instead of battling US troops. Another popular, and effective, target will be Iraq’s decaying oil production infrastructure.
UIA Links to Iran and Terrorism Undermine US Ambitions - Another troublesome consequence of the elections is that Bush officials are forced to support a Shi’ite government led by Prime Minister Ibrahim al-Jaafari, a member of the Dawa Party, one of the two Shi’ite factions comprising the United Iraq Alliance. Dawa is so closely aligned with Iran that not only had it supported Iran in the Iraq-Iran War, but it had moved its headquarters to Tehran in 1979. While in the Iranian capital, Dawa had spun off what Middle East expert Juan Cole called “a shadowy set of special ops units generically called ‘Islamic Jihad,’ which operated in places like Kuwait and Lebanon.” Dawa was also an integral part of the process that created the Shi’ite terrorist group Hezbollah. And Dawa was founded by Muhammed Baqir al-Sadr, the uncle of radical Shi’ite cleric Moqtada al-Sadr, whose Mahdi Army has been accused of attempting to exterminate Sunni populations. In other words, the US is now supporting a government which not only supports terrorism, but itself incorporates a terrorist-affiliated organization in its executive structure. Author Craig Unger will write: “One by one the contradictions behind America’s Middle East policies emerged—and with them, the enormity of its catastrophic blunder. Gradually America’s real agenda was coming to light—not its stated agenda to rid Iraq of WMDs, which had been nonexistent, not regime change, which had already been accomplished, but the neoconservative dream of ‘democratizing’ the region by installing pro-West, pro-Israeli governments led by the likes of Ahmed Chalabi in oil-rich Middle East states. Now that Chalabi had been eliminated as a potential leader amid accusations that he was secretly working for Iran (see April 2004), and the Sunnis had opted out of the elections entirely, the United States, by default, was backing a democratically elected government that maintained close ties to Iran and was linked to Shi’ite leaders whose powerful Shi’ite militias were battling the Sunnis.” Moreover, the Iraqi security forces have little intention of cooperating with the US’s plan to “stand up” as US forces “stand down.” Their loyalties are not to their country or their newly elected government, but to their individual militias. Journalist and author Nir Rosen says the Iraqi soldiers are mainly loyal to al-Sadr and to Abdul Aziz al-Hakim, the leader of the Supreme Council for the Islamic Revolution in Iraq (SCIRI, the other member of the United Iraq Alliance), “but not to the Iraqi state and not to anyone in the Green Zone.” Unger will write, “Unwittingly, America [is] spending billions of dollars to fuel a Sunni-Shi’ite civil war.” (Unger 2007, pp. 327-329)