This page can be viewed at http://www.historycommons.org/entity.jsp?entity=united_nations_human_rights_commission_1

United Nations Human Rights Commission (UNHRC) was a participant or observer in the following events: 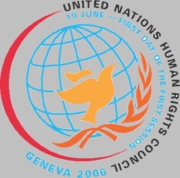 UN Human Rights Council logo. [Source: China Human Rights Net]The Obama administration announces that the US will seek a seat on the UN Human Rights Council. The Bush administration had chosen not to participate in the council, saying that it would not countenance the influence of nations who repress their populations. “Human rights are an essential element of American global foreign policy,” says Secretary of State Hillary Clinton. “With others, we will engage in the work of improving the UN human rights system.… We believe every nation must live by and help shape global rules that ensure people enjoy the right to live freely and participate fully in their societies.” Elections for three seats on the 47-member council will take place in May. The other countries on the ballot are Belgium and Norway. New Zealand agreed to withdraw from the ballot in favor of the US candidacy; New Zealand’s Foreign Minister, Murray McCully, explained, “Frankly, by any objective measure, membership of the council by the US is more likely to create positive changes more quickly than we could have hoped to achieve them.” A human rights advocate tells the Washington Post: “This is a welcome step that gives the United States and other defenders of human rights a fighting chance to make the institution more effective. I think everybody is just desperate to have the United States and Barack Obama run for the human rights council, and countries are willing to bend over backward to make that happen.” Human rights activists have pressured the US to join the council since its inception in March 2006. The council took the place of the UN’s Human Rights Commission, which lost credibility when it allowed nations such as Sudan and Zimbabwe to join and thus thwart criticism of their treatment of their citizens. Bush officials had refused to join the new body, saying that they did not believe the new organization represented any improvement over its predecessor. Then-US ambassador to the UN John Bolton explained that the US would have more “leverage in terms of the performance of the new council” by not participating in it and thus signaling a rejection of “business as usual.” Bolton says of the Obama administration’s decision: “This is like getting on board the Titanic after it’s hit the iceberg. This is the theology of engagement at work. There is no concrete American interest served by this, and it legitimizes something that doesn’t deserve legitimacy.” Obama officials concede that the council has failed to do its job adequately, and focused too much on abuse allegations by Israel to the exclusion of allegations against nations such as Sudan, Zimbabwe, and Sri Lanka. US ambassador to the UN Susan Rice says: “Those who suffer from abuse and oppression around the world, as well as those who dedicate their lives to advancing human rights, need the council to be balanced and credible.” The US intends to join the council “because we believe that working from within, we can make the council a more effective forum to promote and protect human rights.” (Lynch 3/31/2009)