This page can be viewed at http://www.historycommons.org/entity.jsp?entity=united_states_military_academy_1

United States Military Academy was a participant or observer in the following events:

May 25, 2010: Conservative Radio Host Says Obama a ‘Little Mussolini’ Whose Loyalties to US Are Questionable 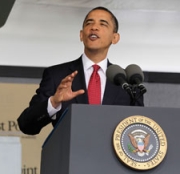 President Obama during his May 22, 2010 speech at West Point. [Source: Potusphere (.com)]Michael Savage, a conservative radio host, tells his listeners that President Obama does not have the right to speak to the graduating class of the Army’s United States Military Academy at West Point, New York, and calls Obama “Little Mussolini,” after the Italian fascist dictator and ally of Adolf Hitler. Savage, referring to Obama’s May 22 speech to the graduating class of cadets, says Obama “slipped and gave himself away” during his speech, calls Obama “insecure” and “terrified,” and says Obama neither had the “right” nor the “honor to speak to the cadets,” and “is not qualified to speak to the cadets.” Obama, Savage says, “overcompensate[d]” during the speech by saying, “I have absolute power in some areas.” Savage then says: “That was to show the boys and the men at West Point who their boss was. It was ‘Little Mussolini,’ ‘Junior Doc’ Obama [referring to Haitian dictators ‘Papa Doc’ and ‘Baby Doc’ Duvalier], who told them in no uncertain terms: ‘Don’t you dare think that I am not in charge. I’ll show you.’” Savage goes on to say Obama has “a woman problem” that has something to do with “the peripatic nature of his mother during his upbringing,” and questions Obama’s loyalty to the United States, asking if his loyalities “lie here [in the US] or somewhere else.… We suspect [they do] not lie here in Washington, DC.” (Media Matters 5/25/2010) The reference to “absolute power” is a joke Obama made at the beginning of his speech. He told the cadets: “As your superintendent indicated, under our constitutional system my power as president is wisely limited. But there are some areas where my power is absolute. And so, as your commander in chief, I hereby absolve all cadets who are on restriction for minor conduct offenses. I will leave the definition of ‘minor’ to those who know better.” Obama received applause and laughter from the cadets for the wisecrack. (CBS News 5/22/2010) Savage has called the landmark civil rights decision Brown v. Board “sickening” (see May 18, 2004), accused Obama of being educated in a radical Islamic madrassa (see January 10, 2008 and April 3, 2008) and being a potential “radical Muslim” (see February 21, 2008), called Obama’s presidential victory “the first affirmative-action election in American history” (see February 1, 2008), accused Obama of being sympathetic towards the Nazis and the Imperial Japanese of World War II (see March 13, 2008), said that homeless Americans should be put in “work camps” (see June 6, 2008), called Obama an “Afro-Leninist” (see June 6, 2008), said that welfare recipients should lose the right to vote (see October 22, 2008), accused Obama of using his grandmother’s death to conceal his “efforts” to falsify his Hawaiian birth certificate (see November 10, 2008), accused Obama of planning to fire all the “competent white men” in government once he became president (see November 18, 2008), accused Obama of desiring his own “Hitler Youth” program (see September 2, 2009), compared Obama to Chinese Communist dictator Mao Zedong (see December 3, 2009), and compared Obama to mass murderer Pol Pot (see December 17, 2009).