This page can be viewed at http://www.historycommons.org/entity.jsp?entity=university_of_chicago_1

University of Chicago was a participant or observer in the following events:

February 1946 and After: Fraudulent ‘Communist Rules for Revolution’ Published, Used to Argue against Gun Control, Sex Education, Other Ideas

The New World News, a British Moral Rearmament publication, prints what it calls the “Communist Rules for Revolution,” claiming that the “rules” were captured during a raid on a German Communist organization’s headquarters in Dusseldorf in 1919 by Allied forces during World War I, and published in the Bartlesville, Oklahoma (US) Examiner-Enterprise that same year. In 1946, the NWN writes, the attorney general of Florida, George A. Brautigam, obtained them from a known member of the Communist Party, who told him that the “Rules” were then still a part of the Communist program for the United States. According to the NWN, the “Rules” are as follows:

Corrupt the young; get them away from religion. Get them interested in sex. Make them superficial; destroy their ruggedness.

Get control of all means of publicity, thereby:

Get people’s minds off their government by focusing their attention on athletics, sexy books, plays, and immoral movies.

Divide the people into hostile groups by constantly harping on controversial matters of no importance.

Destroy the people’s faith in their natural leaders by holding the latter up to contempt, ridicule, and obloquy.

Always preach true democracy, but seize power as fast and as ruthlessly as possible.

Incite unnecessary strikes in vital industries, encourage civil disorders, and foster a lenient and soft attitude on the part of government toward such disorders.

Cause breakdown of the old moral values—honesty, sobriety, self-restraint, faith in the pledged word, ruggedness.

Cause the registration of all firearms on some pretext, with a view to confiscating them and leaving the populace helpless.
The “Rules” are a hoax invented by NWN writers: there was no German Communist “Spartacist” headquarters in Dusseldorf, the Examiner-Enterprise never published such a document, and Russian experts at the University of Chicago will label them an “obvious fraud,” “an obvious fabrication,” and “an implausible concoction of American fears and phobias.” In 1970, the New York Times will investigate the document; no copies of it exist in the National Archives, the Library of Congress, or any of the university libraries it examines. Montana Senator Lee Metcalf (D-MT) will look into the document’s existence around the same time, and will learn that both the FBI and CIA have already investigated it and found it to be “completely spurious.” (Brautigam did endorse the “Rules,” and his statement and signature avowing the legitimacy of the “Rules” will give the document a veneer of legitimacy.) However, the “Rules” will continue to be used to claim that Communists are for a number of ideas unpopular among European and American conservatives, most frequently gun control and sex education. The National Rifle Association is one organization that frequently cites the “Rules” in its arguments against gun-control legislation, citing the Communists’ “secret plans” to “confiscate” Americans’ guns and thus “leav[e] the populace helpless.” American and British lawmakers regularly receive copies of the “Rules” in letters and faxes citing their opposition to gun control, sex education, support for labor, or other “Communist” ideals or entities. In 1992, University of Oklahoma political science professor John George and his co-author Laird Wilcox will write in their book Nazis, Communists, Klansmen, and Others on the Fringe, “Widely distributed since the mid-forties, the ‘rules’ have been trundled out at various times when they ‘fit’ or ‘explain’ the issues of the day, especially to argue against firearms control and sex education.” In April 1996, George will say: “These people [meaning far-right American extremists] would love for the document to be real. But it has been exposed again and again as a phony.” Folklorist Jan Harold Brunvand will write: “The rules have to do with dividing people into hostile groups, encouraging government extravagance, and fomenting unnecessary ‘strikes’ in vital industries. What we have lost, the list suggests, is a world without dissent, budget deficits, inflation, and labor unrest. I just can’t remember any such Golden Age.” (Stickney 1996, pp. xx; George 1999; Rosa Luxemburg 2003; Snopes (.com) 7/10/2007)

1956: University of Chicago Begins Program to Educate Chileans in Economics

A joint project is started in which students from Chile will be sent to learn economics at the University of Chicago using funding for tuition and other expenses from the US government as well as private organizations such as the Ford Foundation. The University of Chicago’s Department of Economics is at this time a bastion of strict adherence to pro-free market thought. The chairman of this department, Theodore W. Schultz, came up with this plan along with an official from the US government during a meeting in Santiago, Chile, in 1953. Schultz himself stated that he desired that the countries of the third world, “work out their economic salvation by relating to us and by using our way of achieving their economic development.” By 1970, some 100 students from Chile will have sought advanced degrees from the University of Chicago. (Klein 2007, pp. 59-60)

Albert Wohlstetter in 1969. [Source: Bettmann / Corbis]Albert Wohlstetter, a professor at the University of Chicago, gathers a cadre of fiery young intellectuals around him, many of whom are working and associating with the magazine publisher Irving Kristol (see 1965). Wohlstetter’s group includes Richard Perle, Zalmay Khalilzad, and Paul Wolfowitz. Wohlstetter, himself a protege of the Machiavellian academic Leo Strauss, is often considered the “intellectual godfather” of modern neoconservatism. Formerly an analyst at the RAND Corporation, Wohlstetter wielded a powerful influence on the US’s foreign policy during the heyday of the Cold War. Wohlstetter, who is believed to be one of several analysts who became a model for director Stanley Kubrick’s title character in the 1968 film Dr. Strangelove, added dramatic phrases like “fail-safe” and “second strike” capability to the US nuclear lexicon, and pushed to increase the US’s military might over what he saw as the imminent and lethal threat of Soviet nuclear strikes and the Soviet Union’s plans for global hegemony. He was such a powerful figure in his hundreds of briefings that he projected far more certainty than his facts actually supported. Though his facts and statistics were often completely wrong, he was so relentless and strident that his ideas gained more credence than they may have warranted. By 1965, he is known in some circles as a “mad genius” who is now collecting and molding young minds to follow in his footsteps. Author Craig Unger writes in 2007, “To join Team Wohlstetter, apparently, one had to embrace unquestioningly his worldviews, which eschewed old-fashioned intelligence as a basis for assessing the enemy’s intentions and military capabilities in favor of elaborate statistical models, probabilities, reasoning, systems analysis, and game theory developed at RAND.” An analyst with the Federation of Atomic Scientists will write in November 2003: “This methodology exploited to the hilt the iron law of zero margin for error.… Even a small probability of vulnerability, or a potential future vulnerability, could be presented as a virtual state of emergency.” Or as one-time Wohlstetter acolyte Jude Wanninski will later put it, “[I]f you look down the road and see a war with, say, China, twenty years off, go to war now.” Unger will observe, “It was a principle his acolytes would pursue for decades to come—with disastrous results.” (Unger 2007, pp. 42-46) 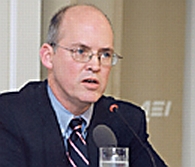 Gary Schmitt. [Source: Think Progress (.org)]Prominent neoconservative Abram Shulsky, who worked under former Senator Henry “Scoop” Jackson (see Early 1970s), joins fellow neoconservative Gary Schmitt, the founder of the Project for the New American Century (PNAC - see January 26, 1998), in penning an essay called “Leo Strauss and the World of Intelligence.” Both are Strauss proteges, having studied under him at the University of Chicago. Strauss is considered an intellectual guiding light for neoconservative philosophy. Strauss, as Shulsky and Schmitt write, believed that all intelligence work essentially boils down to deception and counterdeception, as much with the governments and citizenry an intelligence agency ostensibly serves as with an enemy government or organization. Strauss viewed intelligence as a means for policymakers to attain and justify policy goals, not to describe the realities of the world. Intelligence is “the art of deception,” Strauss taught. Shulsky will go on to implement Strauss’s views in his work with the Office of Special Plans (see September 2002). (Lang 6/2004)

The US spends more than any other nation in the world on health care, but ranks only 50th among 224 nations in life expectancy, according to the 2009 CIA World Factbook. Experts say that this fact could raise serious questions in the debate over health care reform. Americans have an average life span of 78.1 years; the populations of 49 other nations live longer, on average. Japan is first in life expectancy, at 83 years; Australia, Iceland, Italy, San Marino, Switzerland, Andorra, Canada, and France round out the top 10 countries. Other countries, such as Sweden, Norway, Denmark, Singapore, Greece, Spain, and Portugal also do better than the US in life expectancy. The bottom 10 nations are, in reverse order, Sierra Leone, Afghanistan, Zimbabwe, Lesotho, Zambia, Chad, Uganda, Swaziland, Mozambique, and Guinea-Bissau, with life spans ranging from averages of 41 to 48 years. Some experts note that the US is the only developed nation to have a virtually completely privatized health care system. “What we are able to find in the industrialized world is that life expectancy will be influenced in a beneficial manner to the extent that health care expenditure is publicly financed,” says public health professor Harvey Brenner. “The higher the government expenditure on health care, the lower will be the mortality rate.” A study from the University of Chicago shows that a single-payer system—government-run health care—may be associated with higher life expectancy. The governments of such nations as Norway, Sweden, Denmark, Australia, and Canada have government-run health care, and their citizens have some of the longest life spans in the world. The author of the study, Bianca Frogner, writes: “Inevitably the conversation about reforming our health care system focuses on the question of what are we getting for our money and how are others doing with their health care dollars. Life expectancy, along with mortality and morbidity rates, are fairly straightforward numbers to rely on.” Other comparisons show that Scandinavian and other European countries have lower birth mortality numbers than the US, though babies born with abnormally low birth weights tend to fare better in the US system than in the Scandinavian systems. (Landau 6/11/2009)