This page can be viewed at http://www.historycommons.org/entity.jsp?entity=us_navy_pacific_fleet_1

US Navy Pacific Fleet was a participant or observer in the following events: 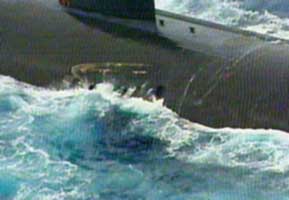 A close-up of the USS Greeneville, showing the gouges on her hull from the collision with the Ehime Maru. [Source: US Navy]The USS Greeneville, a fast-attack Los Angeles-class submarine, collides with the Japanese fishing training boat Ehime Maru, in the Pacific Ocean south of O’ahu, Hawai’i, sinking the vessel. Nine aboard the Ehime Maru are killed in the collision, including four high school students. (Honolulu Advertiser 2/9/2001) The accident has political ramifications far beyond its immediate tragedy. The prime minister of Japan, Yoshiro Mori, will be forced to resign in part due to his callous response to the news. Already-fragile military relations between the US and Japan suffer further damage. And the accident is the first major foreign policy challenge for the new Bush administration. (McCarthy and McCabe 4/15/2001) The next day Admiral Thomas Fargo, commander of the US Pacific Fleet, formally apologizes to the Japanese government and to the families of those killed in the collision. Fargo admits that the fault lay completely with the submarine, and says that the sub was surfacing after what is called an “emergency main ballast blow” when its stern collided with the fishing vessel. 16 civilians were on board, but initially the Navy fails to identify them, saying only that business leaders, lawmakers, and other notable civilians are routinely allowed on board naval vessels as part of the Navy’s community relations program. A Navy spokesman claims that the Greeneville’s mission is to support rescue operations. (Scott, Gordon, and Ishikawa 2/10/2001) Secretary of State Colin Powell apologizes to the Japanese foreign minister the day afterwards; while National Security Adviser Condoleezza Rice informs President Bush about the incident shortly after it happened, Bush chooses to let the State and Defense Departments handle the apologies and other official responses. (Roth 2/11/2001) The Navy and the National Transportation Safety Board will investigate the collision, as will interested journalists, who will find that the Greeneville was on a mission to give what amounts to a pleasure cruise to a number of influential Republican corporate donors, mostly from the Texas oil and gas industries. Investigations find that some of those civilians were actually manning the controls of the submarine when it hit the Japanese vessel. (See February 14-April, 2001.)