This page can be viewed at http://www.historycommons.org/entity.jsp?entity=uss_the_sullivans

USS The Sullivans was a participant or observer in the following events: 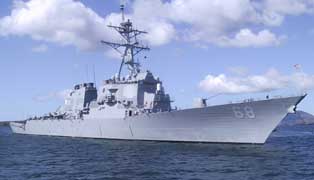 The USS The Sullivans. [Source: US Navy]An al-Qaeda attack on USS The Sullivans in Yemen’s Aden harbor fails when their boat filled with explosives sinks. This is one of a series of failed al-Qaeda attacks planned to take place around the turn of the millennium (see December 31, 1999-January 1, 2000). But the attack remains undiscovered, and a duplication of the attack by the same people will successfully hit the USS Cole in October 2000 (see October 12, 2000). (PBS Frontline 10/3/2002) The US will first learn of the planned The Sullivans attack when interrogating a suspect in the Cole bombing in early November 2000. (Myers 11/10/200)