This page can be viewed at http://www.historycommons.org/entity.jsp?entity=vishesh_kumar_1

Vishesh Kumar was a participant or observer in the following events: 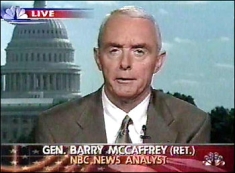 Barry McCaffrey. [Source: NBC]The Nation examines the use of so-called “military analysts” by the broadcast news media, retired generals and high-ranking officers brought on camera to share their knowledge and expertise regarding the invasion of Iraq. The report finds that, like Defense Secretary Donald Rumsfeld and many other administration officials and supporters, the retired military analysts have consistently taken a pro-military, pro-administration slant that has led many of them to make consistently wrong judgments and analyzes. It will be five years before the New York Times exposes the Pentagon propaganda operation in which many of these analysts take part (see April 20, 2008 and Early 2002 and Beyond).
Ideological and Financial Interests in Promoting the War - While many of them indeed have what one analyst, retired Lieutenant General Barry McCaffrey, calls “a lifetime of experience and objectivity,” many of them also have what the report terms as “ideological or financial stakes in the war. Many hold paid advisory board and executive positions at defense companies and serve as advisers for groups that promoted an invasion of Iraq.” As a result, the report says, these analysts’ objectivity must be questioned. McCaffrey and his colleague, retired Colonel Wayne Downing, both NBC analysts, are both on the advisory board of the Committee for the Liberation of Iraq, a lobbying group formed to bolster public support for the invasion. Its mission is to “engage in educational advocacy efforts to mobilize US and international support for policies aimed at ending the aggression of Saddam Hussein,” and it deliberately reaches out to influence reporting in both the US and European media. Downing has also served as an unpaid adviser to Ahmed Chalabi’s Iraqi National Congress, a prime source of the fraudulent propaganda and disinformation that provided a rationale for the war (see June 1992 and (1994)). NBC viewers are unaware of McCaffrey’s and Downing’s connections to these pro-war organizations.
McCaffrey and IDT - Neither are they aware of McCaffrey’s seat on the board of four defense firms—Mitretek, Veritas Capital, Raytheon Aerospace, and Integrated Defense Technologies (IDT)—all which have multimillion-dollar defense contracts. IDT is of particular interest, as stock analysts believe that its currently floundering financial state could be remedied by hefty government contracts. McCaffrey has been an outspoken critic of Rumsfeld and his war policies, but his primary objection is his repeated statement that “armor and artillery don’t count” enough in the offensive. He recently told an MSNBC audience, “Thank God for the Abrams tank and… the Bradley fighting vehicle,” and added that the “war isn’t over until we’ve got a tank sitting on top of Saddam’s bunker.” In March 2003, IDT received over $14 million in contracts relating to Abrams and Bradley machinery parts and support hardware.
Downing and Metal Storm - Downing is a board member of Metal Storm Ltd, a ballistics-technology company with both US and Australian defense contracts. According to its executive director, Metal Storm’s technologies will “provide some significant advantage” in the type of urban warfare being fought in Iraq.
Fox News and wvc3 - Fox News analysts Lieutenant Colonel William Cowan and Major Robert Bevelacqua are CEO and vice president, respectively, of the wvc3group, a defense consulting firm that serves as a liaison between arms companies and the US government. The firm recently signed a contract to promote military aviation equipment produced by a New Zealand firm. The firm promotes itself by advising potential customers of its inside contacts with the US military and the Defense Department. A message on its Web site, augmented by a sound file of loud gunfire, reads, “We use our credibility to promote your technology.” Another Fox analyst, Major General Paul Vallely, represents several information-technology firms. Vallely is most valuable, says Fox bureau chief Kim Hume, as a commentator on psychological operations.
Little Concern at the Networks - The networks are relatively uninterested in any potential conflicts of interest or possible promotions of ideological or financial agendas. Elena Nachmanoff, vice president of talent development at NBC News, dismisses any such concerns: “We are employing them for their military expertise, not their political views.” She says that the analysts play influential roles behind the cameras at NBC, helping producers decide on what to report and how to report it. But, she says, defense contracts are “not our interest.” Hume says that Fox “expect[s] the analysts to keep their other interests out of their commentary, or we stop using them.” Hume admits that Fox has never severed its connection with any analyst, though it is aware of Cowan’s, Bevelacqua’s, and Vallely’s ties to their respective defense firms. Interestingly, Vallely, the expert on so-called “psyops” warfare, developed a concept he called “MindWar,” a psychological propaganda strategy that uses, in his words, “electronic media—television and radio” in the “deliberate, aggressive convincing of all participants in a war that we will win that war.” Nation reporters Daniel Benaim, Priyanka Motaparthy, and Vishesh Kumar muse, “With the televised version of Operation Iraqi Freedom, we may be watching his theory at work—and at a tidy profit, too.” (Benaim, Motaparthy, and Kumar 4/21/2003)