This page can be viewed at http://www.historycommons.org/entity.jsp?entity=whitaker_and_baxter_1

Whitaker and Baxter was a participant or observer in the following events: 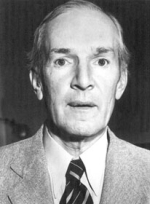 Upton Sinclair. [Source: NNDB (.com)]Upton Sinclair, the author of Urban Jungle and a well-known “muckraking” journalist, runs as a Democratic candidate for governor of California. Sinclair has previously run failed campaigns for political office as a Socialist. He runs on a platform of eliminating poverty in California. To beat him back, the California Republican Party hires an ad agency and the first political consulting firm in the country, Whitaker and Baxter. The consulting firm decides that the best way to beat Sinclair is to portray him as a crazed Bolshevik—a “Red.” The firm produces phony newsreels of staged events, and pays for them to be shown at movie houses throughout California. One newsreel depicts crowds of bedraggled hoboes leaping off of a freight train, and one hobo telling the camera, “Sinclair says he’ll take the property of the working people and give it to us.” Another ad depicts an actor with a heavy beard and a thick Russian accent explaining why he will vote for Sinclair: “His system worked well in Russia, so why can’t it work here?” Louis B. Mayer, the head of MGM and a powerful California Republican, ensures that the newsreels get near-saturation coverage throughout the state. Sinclair is defeated. In 1990, media pundit Roger Simon will write, “Though more than a half-century has passed, the fundamentals of that first negative video commercial are the same that are used in negative TV ads today: fear, danger, and stereotyping of the enemy.” (Simon 10/1/1990)