This page can be viewed at http://www.historycommons.org/entity.jsp?entity=zuhra_mohamed_1

Zuhra Mohamed was a participant or observer in the following events: 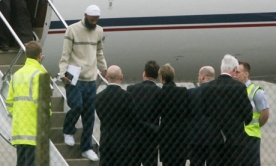 Mohamed returning to London. [Source: Lewis Whyld / Associated Press]Binyam Mohamed (see May-September, 2001, February 8, 2009, and February 9, 2009) is released from Guantanamo, and returns to Great Britain. He is flown to Britain on a private chartered Gulfstream jet similar to those used by the CIA in “extraordinary renditions.” His sister, Zuhra Mohamed, meets him at the RAF Northolt airbase in west London, and tells reporters: “I am so glad and so happy, more than words can express. I am so thankful for everything that was done for Binyam to make this day come true.” His lawyers claim that he has suffered severe physical and psychological abuse, some of which was inflicted in recent days. He suffers from what his lawyers call a huge range of injuries. Doctors have found Mohamed suffering from extensive bruising, organ damage, stomach complaints, malnutrition, sores to feet and hands, and severe damage to ligaments. His weight has dropped from around 170 pounds to 125 pounds. His lawyers say he suffers from serious emotional and psychological problems, which have been exacerbated by the refusal of Guantanamo officials to provide him with counseling. Mohamed’s British lawyer, Clive Stafford Smith, says his client had been beaten “dozens” of times, with the most recent abuse occurring in the last few weeks (see September 2004 and After). “He has a list of physical ailments that cover two sheets of A4 paper,” says Stafford Smith. “What Binyam has been through should have been left behind in the middle ages.” Mohamed’s American military lawyer, Lieutenant Colonel Yvonne Bradley, adds: “He has been severely beaten. Sometimes I don’t like to think about it because my country is behind all this.” Britain’s former Attorney General, Lord Goldsmith, an advocate for the closure of Guantanamo, says that allegations of abuse against Mohamed, a British resident, should be raised by Foreign Secretary David Miliband with his American counterpart, Secretary of State Hillary Clinton. “If there are credible accounts of mistreatment then they need to be pursued,” Goldsmith says.
Care Provided upon Return - Upon his return to Britain, Mohamed will receive physical care and emotional counseling in a secure, secret location by a team of volunteer doctors and psychiatrists. He will be kept under a “voluntary security arrangement,” where he must report regularly to authorities, but will not be subject to charges or anti-terror control orders. The US dropped all charges against Mohamed last year, including allegations that he had participated in a “dirty bomb” plot. (Townsend 2/22/2009; Booth and Norton-Taylor 2/24/2009)
MI5 to Be Investigated? - At least one MI5 officer may face a criminal investigation over his alleged complicity in torturing Mohamed (see February 24, 2009). And Mohamed’s future testimony is expected to shed light upon MI5’s own participation in his interrogation and alleged torture; Mohamed may sue the British government and MI5, Britain’s counter-intelligence and security service, over its alleged complicity in his detention, abduction, treatment, and interrogation. If filed, Mohamed’s lawsuit could force US and British authorities to disclose vital evidence regarding Mohamed’s allegations of torture. (Townsend 2/22/2009)